A while back I drew a picture called "Paranoia" intended as a parody of a certain form of genre art that gets on my nerves. I'm slowly becoming aware that this drawing, while something drawn in a moment of silliness, actually works as a drawing, even if the emotion portrayed is melodrama and the intention a self-parody, a satire of all the melodramatic false tragedy in art and poetry produced en masse by teenage members of the darker subcultures who haven't yet learnt that the rest of the world finds deliberate angst annoying rather than edgy. Madness, fear and despair have gone from taboo subjects to subjects which have developed cliche representation. While I appreciate genuine artistic expression of these things, and people who really have gone through traggedy expressing this in art, I get a little exasperated when it turns into repetitive genre art. 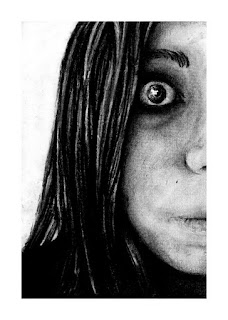 http://carolin54323.deviantart.com/art/Paranoia-197405934
There has been a flurry of drawings and photographs of (usually) young women and teenage girls either screaming, looking dead or staring madly, while pale as sheets and in high contrast, wearing far too much eye-makeup and their lips and noses blending away into insignificance, usual backgrounds including stairwells, baths and bathrooms made to look like they slit their wrists, plain white or some claustrophobic photo-manipulated background. Sometimes they have their mouths taped shut or are drawn with their mouths sewn shut, sometimes they are done to look like they are crying blood. It is not only the undertones of enacting a fantasy victimhood that worries me, but the fact that fresher portrayals of fear, madness, lunacy, depression, suicide and despair have not been imagined, and instead it has become a genre where these things are bordering on being glamourised in false sensationalism rather than actually considered.
As somebody who has really been the darkness, as someone who knows exactly how dark it is in the place where one really does want to die, it bugs me that people want to turn it into melodrama, sensationalism, a desire to shock, or perhaps live in a fantasy of tragedy. The darkness does deserve examination, exploration and depiction in art, but it deserves honesty and thought and genuine attempts at examination, exploration and understanding, not ciche "more-tortured-than-thou" self portraits and glamourised victimhood.As a member of the Gothic subculture, I often have allegations of falsifying my tragedies for attention levelled at me because people really believe in the stereotype of the gloomy goth that is trying to be all depressed and pained for sympathy and attention and to hold a "darker than thou" attitude, and unfortunately that stereotype is perpetuated by people who live up to that, at one end is those of a histrionic disposition who do self harm for attention or as a sympathy plea (unlike most self-harmers who do it primarily as a way to vent emotion, self-punish or who have become addicted to it and are usually rather secretive about their activities) and at the other those who churn out endless similar dark poems about woe, longing, despair, suicide and self harm, or images as described above, and do so not from the perspective of someone actually going through all that, but as someone trying to be purposefully dark either to garner the sympathy of others or to conform to the standards of like-minded young people who somehow glamourise tragedy.
I am not going to say this is primarily a problem among teenagers of the Goth and Emo subculture, because it is wider than that, but we elders of the dark community who've been at this dark and spooky lark for two-digit years need to show a good example to the younger members of the subculture and point out false tragedy and shallow pretence wherever it appears, otherwise these people are going to think that melodramatic attention pleas work, or are somehow genuinely artistic. It is also time that those who are both artistically and darkly inclined started either producing more original material on there themes rather than repetitive cliches, or, if already being fresh and looking at things from different angles, being a bit more vocal about their work. People need to see that the stereotype is not edgy or gritty, but tired and cliche. When that artistic approach was popular enough for bands like Evanescence to become mainstream popularities, it was clear that the topic was getting worn out and seeing that Evanesence has been around since 1995, it really is time for something different. Tragedy, madness and despair have been themes of artistic and literary endeavour since at least when the Greeks wrote Elektra, Oedipus Rex and Medea and in that time, forms of genre art have appeared where various forms have got stale, and then been changed, and gone in a new form again, there's no reason it cannot happen now, I just wish that the majority of people making this stuff had even heard of Sophocles and Euripedes and Aeschylus or read through Hamlet, Macbeth, or seen a version of Romeo & Juliet on a stage or listened to and understood tragic French Opera... Darkness and despair can be done with great beauty and skill, but only when it is heartfelt, understood and not a third, fourth, hundredth-hand idea.
Part of the problem is that the internet allows for information bombardment, and it is easier to find something similar to what you've already seen than it is to find something utterly new on account of the nature of the keyword system of internet searching and linkage. It is easy to find lots of the pale-faced, wide-eyed screaming victim-maidens wearing far too much badly applied eye-makeup, it is harder to find different portrayals of despair, pain, fear, etc. and if one does not put in the art history/contemporary art research time, they may be entirely missed, and therefore new ideas of the inspiring kind aren't always spotted and found in order to trigger something new again, and the idea that this genre art is how such themes are to be represented is reinforced.

I could try and give a 'pop psychology' analysis of these images, but I'm not enough of a psychiatrist to do much good, and it still seems strange to me as to why anyone would want to present themselves as a victim to be pitied and comforted rather than try and seek genuine affection via better means, it is surely more effort to be deliberately gloomy. Doing things for shock value is crass and histrionic. Take the higher ground.
Posted by The HouseCat at 08:59