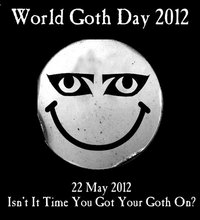 Today is World Goth Day. I can't really "get my goth on" at work, as I work at a school, with children and as not to inadvertently scare the children or worry the parents (there is still a lot of misinformation about Goths and what we supposedly get up to),  I dress rather sensibly and fairly normally. I did want to mark World Goth Day, though, so I put together a slightly more Goth-inspired outfit than usual. As I normally don't wear all black to work (I tend to wear black trouser suits with coloured tops) and I wasn't  wearing anything that did not come from a mainstream retailer, the outfit probably won't arouse suspicion about subcultural tendencies.

World Goth Day has been criticised as being a pointless event, but I don't think it so. A lot of us who live in places where Goths are not necessarily accepted but are at least mostly tolerated and who face only mild street harassment seem to take the ability to be ourselves in public for granted. There are people who, for one reason or another, are not able to be themselves to a reasonable extent (I guess we all make small sacrifices) on a daily basis and there are those who are trying to be Goth in places hostile to any form of nonconformity.  There are several instances globally of subcultural types facing very real threats, from ::Punks being arrested, shaved and put through "re-education" in Indonesia:: to ::Emos being killed in Iraq:: because they are perceived to be gay and because Emo is seen as a western thing. Even those of us who live in places like the UK and America, perceived as "safe" places to be subcultural, can face the threat of serious violence, such as the unfortunate case of ::Sophie Lancaster:: who was murdered for being a Goth.

World Goth Day is a day in which we stand in solidarity as a global community, a day to remember that we are not alone in our unusual tastes, and a day to remind others that they are not alone either. Despite the threat of prejudice and potential for violent, even deadly attacks, Goths and other subcultures remain. The founders of World Goth Day proclaim on their website, "There are quite a few Goths who have fought damn hard to retain their identity despite peer pressure, family pressure and indeed, any pressure to conform, and if you've gone to all that trouble to preserve what you believe is the 'real you', don't you think you owe it to yourself to shine for a day?"

It is also a day for those Goths who through location, family circumstances, time constraints or other such reasons, don't get to participate in the subculture as they once did. Some areas are running midweek Goth nights (not so good if you're working the next day, but good if it's cheaper than paying weekend babysitting rates). It's an occasion to bother getting dressed up for, to request Sisters of Mercy and The Damned on the radio, to wear those platform boots that have been lurking in the back of the cupboard unworn for a year. Yes, theoretically one could do these on any day, but making a special day of it is a bit of a psychological incentive.

The weather has been very warm (by Scottish standards), so I went for a floatier blouse than usual and no jacket or sweater. Usually I am wearing some form of jacket, cardigan or sweater, usually a blazer, but those are not relevant to this post. It has quite a high neckline, even if the top section is mesh, and the top of the more opaque section stops above my cleavage line. I do not think it appropriate to my position to be showing cleavage at work, and the sun is bright enough to burn my delicate pale skin. I always wear trousers a bit like this to work.

My watch was £8.50 in a charity shop, it has an extra-long wrap-around strap that I arrange differently every day, I think it is the perfect blend of funky and sensible. I don't normally wear a watch outside of work, but it's far too useful at work for me to not wear one. The necklace is Scottish, bought here and made here, with a "stone" of what I think is thistle-purple glass. To me, it is just an oval with interlace designs, but it is just Cross-ish enough to hopefully avert any suspicion caused by the Pentacle. I don't want to wear a Christian cross when I'm Pagan, but I also worry that some people may have heard equally venomous rumours about Pagans as they have Goths... Who knows what they think Goth Pagans get up to!

My shoes are comfortable and sensible - a pair of those flat shoes with the decorative leatherwork terribly popular amongst hipsters at the moment (anybody know what they're called?). I walk several miles to work and back on foot so I need shoes that are comfortable, but I also need to look sensible and don't have the option of changing shoes, so I can't wear my hiking boots (that and they make my feet sweat when it gets warm).

My hair, by the way, is a dark aubergine colour.


Not pictured are two other things I did for World Goth Day - one was clip one of my spiked cuffs onto my key-chain, and the other was wear a length of silver and black around my wrist. World Goth Day don't have special rubber bracelets, but a S.O.P.H.I.E bracelet would be appropriate; actually a S.O.P.H.I.E bracelet is always appropriate. I should really order one soon.