Last month it was my birthday, and a very good friend of mine organised the most fabulous birthday present I've had in years... She organised for me to spend my day handling owls. Now, I have not mentioned it on this blog before but I have a bit of a fondness for owls, so this idea of an outing was exceedingly exciting. So exciting, in fact, that I was told I must not squeak with excitement in front of the owls lest I cause a commotion amongst them - a difficult request, but one that I managed. I spent my day handling owls and telling people about owls, helping to educate and fund-raise, with ::2 Wit 2 Woo Owl Rescue::

I had never handled owls or any other birds of prey before, and was a bit nervous - after all, these are wild animals, predators and carnivores, but after instruction in how to properly hold them, in how to avoid startling or antagonising them, I soon found that these particular owls were actually quite sociable. I was asked before the day to wear sensible clothes (no frills, no braids, minimal jewellery, etc.) because the owls are liable to try and play with anything dangling or shiny - so absolutely no dangling bat earrings!

Owls, in general, do not make good pets. They are an awful lot of hard work to look after, and have a specialised diet that is not for the squeamish. Some species of owls have a lifespan of over 30 years, so it is a huge long-term commitment. One of the issues that the rescue organisation has come across is the 'Hedwig effect' where people have seen the 'cute fluffy owl' on Harry Potter, sought one for themselves and not been prepared for the difficulties of keeping an owl in captivity and have thus given the owls up to organisations such as 2 Wit 2 Woo.

The owls I handled are mostly rescue owls, which are unable to return to the wild, or were captive bred so have been socialised in order to act as 'education owls'. These are owls which visit schools and events and help in the education of the wider public. People also can pay a small amount to be photographed holding an owl, and this raises money for the owl rescue. 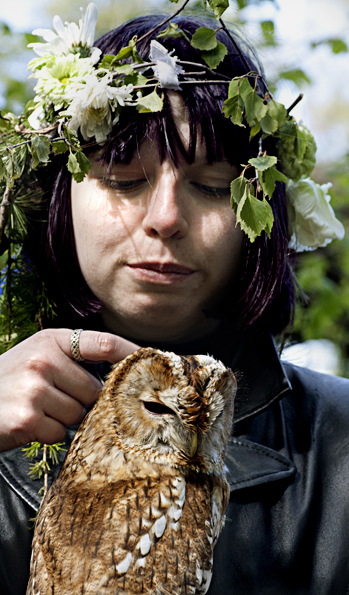 This picture is of me stroking a tawny owl called Woo. An interesting fact about tawny owls is that the "t'wit-t'woo" sound is actually two owls and is one owl calling to its mate and the mate's response. The "t-woo" part is the male owl responding. Woo is an exceedingly friendly owl, and surprisingly relaxed about people. We were in a fair full of people, and he was sitting on my arm being shown to the public, and as I stroked him he slowly fell asleep still perched on me! I am wearing a crown of leaves and flowers because it is a May Queen crown as I was at a May Fayre.

The largest owl I handled was Mr. Jangles, a European Eagle Owl. He had been cruelly mistreated by his previous owners, having been made to fight dogs (presumably as part of "entertainment" and betting). He is an imposing and powerful bird, but very sociable now, despite his past. It has taken four years  to get him rehabilitated to the point of being an educational owl. That said, some young children approached with a dog, and he got a fright and tried to fly off while I was still holding him! It is very important for pets at events to be on leads, and for those responsible for them to listen to instructions, especially safety instructions. Mr. Jangles, though, does have a very good nature. My friend, Suzy, who organised this, ended up with him nuzzling into her shoulder wanting cuddles!

I handled all the owls photographed in this blog. Huge 'thanks' to 2 Wit 2 Woo for letting me handle their hours. I hate to demand, but they are an excellent cause and please donate to them if you have money to spare. Huge 'thanks' to Suzy for organising my trip out, and for taking all the photographs.
Posted by The HouseCat at 12:19