It was my birthday recently, but I'm not saying how recently, or how old I am. 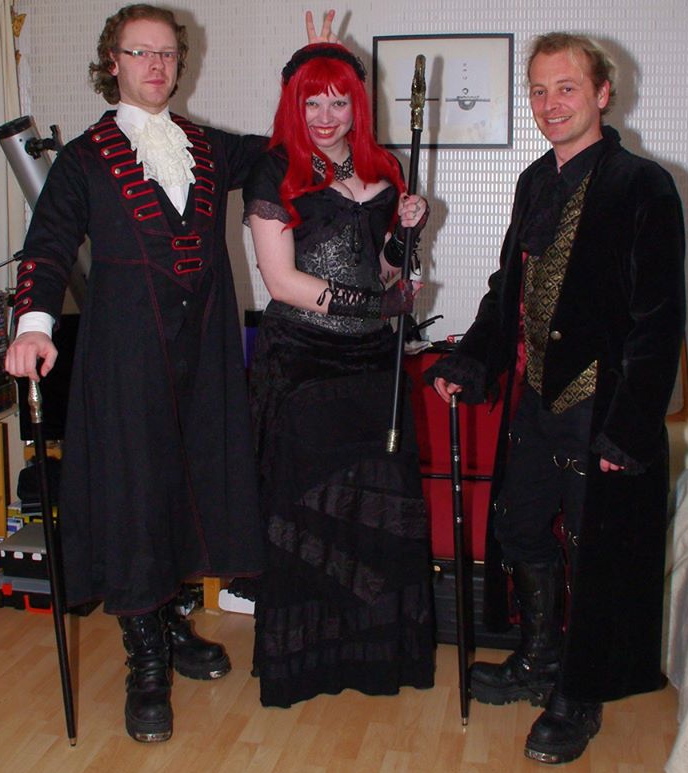 It's irrelevant how old I am; we creatures of the night don't age! :P

Anyway, as there is no such thing as being too old to have fun and because we always want an excuse to be fancy, I had a dark fantasy themed birthday party that ended up leaning to a theme of "vampires". It was not so much a dressing up party as an excuse to wear our fanciest clothes with a little bit of a nod to the theme through accessories and makeup.

It was a small gathering; there was Shaun who isn't in any of the photos because he took them, Raven (of course) who looking somewhere between an anachronistic gentleman and a vampire (no surprises there!), J. who came as in post-apocalyptic fashion, with deconstructed trousers, goggles and a mask, Suzy_Bugs, who wore a long medieval-inspired dress with spider-web jewellery and a glittery, witchy mini-hat (but is shy about a photograph of herself in a dress being displayed publicly), M. who is usually a sweet Lolita and brought elements of that aesthetic to an outfit with a broken doll theme, K. who came with masquerade mask and claok and Brian who also came in elegant aristocratic finery.

Raven made me a coffin birthday cake, presents and cards were exchanged, copious amounts of biscuits, Gothic cupcakes and crisps were consumed, much chatting was done and a good time was had by all. I didn't want a large party as I am not socially comfortable in a large group, and I am not the sort to go out for a birthday drinking session, so I was very happy with a tea-and-biscuits gathering of good friends in my apartment, and a lot of fancy outfits. I appreciate any excuse for corsetry - not that I need an excuse! 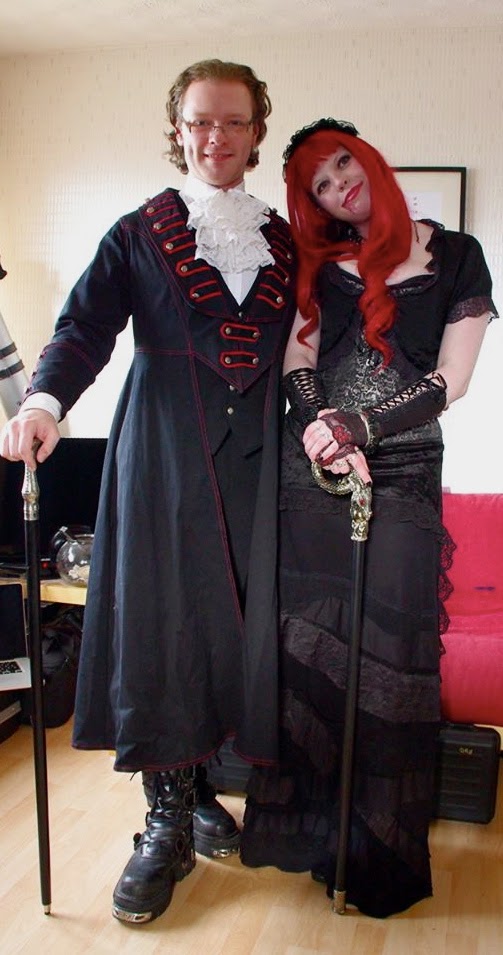 My party wasn't actually held on the day of my birthday as Raven was working that day, and it didn't seem right to organise a party that my partner couldn't attend. On the evening of my actual birthday, Raven took me out for dinner to a nice restaurant, which was very sweet and generous of him.

We might be a bunch of theoretically grown-up (mostly) Goths who really ought to know better, but we had too much fun being very silly! If you are how old you feel you are, on some occasions I am about 12! And Raven, who is supposed to be older and more sensible than me is the one making bunny-rabbit ears behind my head in the first photograph. It was nice to have an opportunity for everyone to put on their finery, too, as there are not many such opportunities in the local area - I really must get about organising more tea-parties and meet ups!

Raven put a lot of effort into getting everything ready, especially the food and the coffin cake. His efforts were much appreciated. I had a wonderful time and I hope my guests enjoyed themselves as much as I did.

All photographs were taken by Shaun - many thanks to him for bringing his camera! Small photographs are thumbnails; clicking on them will let you view them in a scrolling gallery.