I sadly have but the one offering for red and black week - this Gothic Lolita outfit. It's a photo from a couple of months back.

Currently I am ill again; I have had bad luck this year with illnesses!

I have frequent headaches from what I presume is sinus problems, and I am very congested indeed and rather under the weather. I've also developed a rather unpleasant cough. I am off to the doctor tomorrow as today is my 8th day of being ill with what started as a sore throat and then seemed to move upwards into the rest of my head.

While I have been in to work up until this morning, I was coughing and spluttering continuously, have lost my voice and can barely concentrate with the headaches. I made sure I stayed until I had sorted all tasks so I wouldn't leave anything for others to do in my absence and requested to go home sick. The over-the counter medication is having little effect, not even the nasal spray specifically designed for sinus and mucus problems. Right now, I am tucked up in bed with hot drinks. Even though I slept badly last night and the night before (and the night before, etc.) I can't manage to sleep today, so I am alleviating the tedium of recuperation with updating my blog. I am in no position to do more than display an old photo, and have been too unwell to prepare anything in the last few days. Next year I will try and have more done in advance. 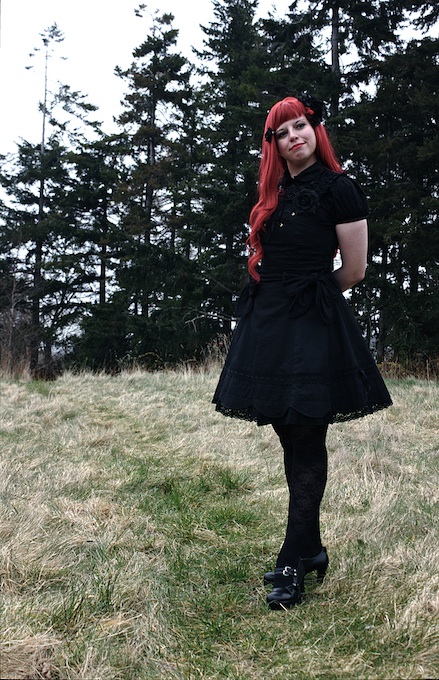 The photograph is by ::Chance Photography:: and the location is the meadow near my apartment. The weather was being typically Scottish, with a grey but surprisingly bright sky and cold, damp air. I was photographed in the same meadow a while back for a previous Red and Black Week post (::here::) wearing a different red wig - that one I eventually decided to straighten as the fibres had kinked and become damaged with frequent wear and it was easier to keep them in check on a straight wig than a curled one. The wig in this photo is a Lockshop wig and the fibres seem far more durable and the curls have remained very well.
✯♕✯

As this is primarily a fashion post and not actually JUST a rant about my being ill, here is the outfit run-down:

It is certainly not the fanciest Lolita outfit, but I am quite pleased with it. I am quite tall, so the skirt of the dress comes to just above my knee rather than ending at the knee itself, but I am not really fussed that it is on the edge of breaking "the rules" as I rather like this outfit irrespective of how Lolita it is. I am more interested in feeling pretty than making sure I adhere completely to the Lolita template.

The shoes in this photo are my first pair of "Lolita" style shoes. I have replaced the skulls with a matching set as the shoes were secondhand and the previous owner had lost some of the original skulls. The construction of these shoes does not appear to be of very high quality as I have had to re-attach all of the decorative bows at some point (none seemed sewn securely) and one of the straps snapped. I am, however, quite good at mending things so this has not been a huge bother, and while I have not owned them long, I am not sure how much the were worn by the previous owner.

My favourite thing about this outfit is how with such a dark colour-scheme for the majority of the photo, the red of the wig stands out really well even though it's actually not that vivid. I know it looks quite bright in some photographs as it tends to look quite plastic under bright flash, but this photograph is probably most representative of how it looks in real life.
Posted by The HouseCat at 08:53