Suzy_Bugs suggested visiting Rafford on our road-trip; I think she spent some of her childhood in the area, and was keen to get us to visit this old cemetery. The cemetery itself is in what seems to be an odd location; off two main roads and away from the church. I think this is because the cemetery pre-dates the church, and while there is a small building in the centre which I think was the grave-keeper's cottage, there's no visible sign of where the church used to be. I will cover the new church in my next post. The whole place is quite low, in a bit of a valley, surrounded by wooded hills and a small village.

The photograph above is what I presume was the grave-keeper's cottage. I had a peek in the windows and open door, and it looks like it is now home to things like planters, but was once where someone lived or worked. Either way, it is fairly empty now, mostly home to lots and lots of spiders. It still has its windows, and it still has its roof, so it has managed to remain a little outbuilding quite well. 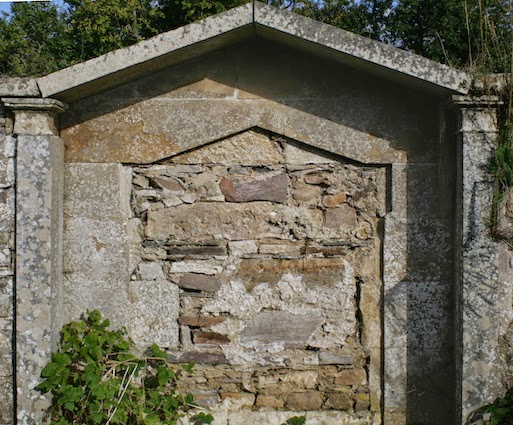 The photographs to the left, above and below are of a large mausoleum that dwarfs most of the surrounding grave monuments. The mausoleum has no roof, but does have several plaques inside, mostly over grown by ivy and brambles, so  I could not read which family are interred there. At the back I presume there had once been a plaque naming the family and which members were buried there, but that had fallen away. There were still plaques on other walls, though. The walls of the mausoleum are surprisingly thick, and I do wonder if it was initially designed to have a roof, or whether the family who had it built just wanted a sturdy monument.

It was late afternoon and quite a bright day, so the shadows were quite strong, and everything getting slightly golden as evening approached. I think it was a rather good time for photographing. Some of the photographs I took later on were perhaps a bit too late in the day, but I think I had it just right for here, Rafford Church and the earlier photographs for Pluscarden Abbey (later in the road-trip). I think there is a window of time in the late afternoon, if the weather is suitable, that is really good for architectural photographs, because there's enough shadow to get defined planes and faces of walls and roofs (especially if there is detail and subtle angles) but it's neither dazzlingly bright, nor too dingy.


Suzy_Bugs told me that both this cemetery and the one by the abandoned chapel visited earlier have graves far more recent than the last use of their associated church or chapel because there is some rule or law that says that if a graveyard stops being used for new burials for long enough, that it can be developed over or somesuch. I'm not sure if this is exactly right, but it does pose an interesting question about how long human remains and graveyards should be left untouched in respect to those who are buried there. Personally, I would be in favour of never building over them (especially as it seems in recent years that we expand our cities and towns too much), but sometime land is unknown to be the last resting place of people because it has been disused as a cemetery for centuries or even millennia. There are a lot more factors in this debate than I can fit into a small paragraph, but it is something I'd like to hear my reader's thoughts on.
Posted by The HouseCat at 04:51