Back on July 19th, the Highland Lolita community had a meet-up at the Velocity Café which is a bicycle-themed cafe attached to a bicycle workshop. They also are active participents in the cyclist community here and run things like bicycle repair classes! I would have loved to turn up to the meet on my vintage-style bicycle, but it is currently in pieces because I was working on cleaning it up, replacing worn parts, and making it a bit special in the decoration department (plus, I would probably wear Ouji to go cycling rather than Lolita).

I forgot that the bus service to where I live is drastically reduced on a Sunday, so ended up having to call a taxi and was a bit late to the meet. I hate being late to meets! It was, however, my own silly fault for forgetting about the different bus timetable on a Sunday. We all had our snacks - some of us had tea and cake, but I had juice and some houmous with lovely crusty delicious bread - it tasted hand-made, and it was really, really good bread. We sat around chatting and eating for a while. One of the advantages about being such a small group is that we can have a whole-group social conversation when we meet up, rather than either ending up confined to only those we are sat with, or doing a lot of milling around.

After our meet-up at the Velocity cafe, we walked down the hill and took outfit pictures in the alcove of the rear entrance of the Eastgate mall. It was outdoors with plants and such, a relatively plain wall, and most of all, secluded from the wind. This summer in Scotland has been mostly dreich through to plain rainy, and the weather has been most things other than sunny and still!


My outfit was another black and white outfit, but this time I was aiming for something distinctly more Gothic, rather than the more classic outfit I aimed for with the outfit I wore to the Botanic Gardens. I actually wore this outfit again yesterday, repreiving it for a shopping trip into Inverness with Raven and visit to the Blend Tea-House (my favourite place for tea in Inverness, and also does amazing bagels!). We had a lot of fun with our outfit photos, and also took a group circle-of-shoes photograph, and lots of selfies with each other. The wind was a bit blowy, and my wig rapidly got straggly; it isn't the best quality and has a tendency to tangle itself up rather rapidly.

I took some photos of the other Lolitas. I really like Keara's amazing make-up and while I am not usually a fan of things pastel and cute, I really liked her entire outfit. Amity Lee's outfit was also really adorable, and her multicolour wigs are always so cool.

We took some selfies with each other, and generally used the moment as a photo opportunity. Lolita is a very elaborate fashion, and it takes a certain amount of effort to put together a nice outfit. Most of the other Lolitas are more experienced than I am, and better at putting together a nice co-ord (or co-ordinate; a co-ordianated outfit where everything matches together) than I am. Sweet is certainly the most popular style in our community, but Danielle wore a lovely old-school Country Lolita co-ord, and I am always the one in Gothic!

As well as individual photographs, we took some selfies together!

A few random strangers wanted their pictures taken with us, both when we were taking outfit-pictures in the alcove before the footbridge, and generally when we were in the mall! I do wonder about what happens to all these pictures - they must be out there on the internet somewhere! A lot of little girls especially think that we're just fabulous. I have notived that sweet Lolitas get asked if they're princesses a lot, and I get asked if I am a witch! (I am a good witch, of course! :P). What would probably either frighten or confuse the children that ask if I answered honestly with anything that wasn't something along the lines of "no, this isn't fancy dress, I just like wearing clothes like this" is that technically, yes, I am actually a witch too, but my appearance is completely unrelated. Neo-Paganism, Wicca and modern Witchcraft are such alien things to most people that I don't want to bring it up, lest my Gothic appearance confuse them, or frighten them by correlating with negative stereotypes.


We decided to go into the mall itself because the weather looked inclement, and because we could get ice-cream! We went to Mackay's which is Scottish ice-cream chain.

Afterwards we all split up and went our separate ways home. I took a bus with Amity Lee, and then tried walking from the bus-stop to my house... the path is very uneven, and I was wearing heels I can only just walk in on flat, even ground. I sadly fell and turned my ankle badly, but I was near a friend's house, so I managed to get them to give me a lift back to my apartment, and they helped me up to my door and into the house. I wasn't too scuffed up, but I laddered my tights. It was quite sore, though. 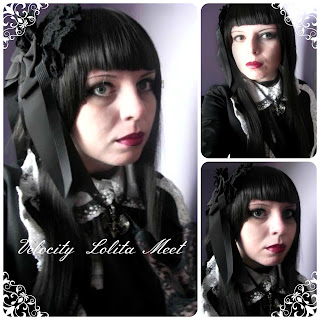 Here I am before the wind ruined my wig. I'm less keen on the straight fringe than I used to be; I'm starting to think it doesn't really suit my face-shape. The lipstick was a colour I really liked, and stayed remarkably well despite eating and drinking while wearing it.

Outfit Run-Down:
☠ Canotier: Alice & The Pirates ☠ Wig: bought on eBay, not sure of manufacturer ☠ Blouse: Bodyline ☠ Neck-bow: hand-made by me ☠ Gloves: secondhand on eBay ☠ Jacket: Putumayo ☠ Dress: Bodyline ☠ Tights: from the Hallowe'en shop last year ☠ Shoes: Demonia ☠ Bag: gifted, not sure of supplier or manufacturer.