I have to do a precedent study for college, as I am designing a seaside home in a semi-rural location, so I have been visiting a bunch of little fishing villages on the Black Isle coast as that is the area our home is for. That is quite a long way to go just to look at stone cottages with bottle-neck gables, rectangular windows and dormers ('coastal vernacular residential architecture idiosyncratic to the locality')  as lovely as they may be, so I gathered up some friends and made a road-trip of it. Raven, Catastrophe and K went with me.

The weather was a bit chilly, and partially cloudy, but a lot milder than I would expect for February in Scotland; there's still snow on the taller hills, but it's strangely mild this year in terms of temperature -  in terms of storms, it's been quite bad. Catastrophe and K went to stand right up near the sea wall and got utterly soaked by the crashing waves. Raven photographed them, and I went off to look at cottages. But I didn't JUST look at cottages...

Above the cottages I noticed a graveyard and church...

I haven't been able to find out much about Rosemarkie Parish Church except that it was opened in 1821, and is in a similar style to most of the stone-built Gothic Revival parish churches in the Highlands; it's very 'Church of Scotland' - fancier than most Free Church churches and less fancy than Catholic ones. I know that many of the parish churches are very similar, but I find them all uniquely charming in their own way, and while to some it may seem "they're all the same", to me each one is different with its own quirks, and I appreciate all of them.

As far as churches go it is not the biggest, nor the fanciest, nor the most unusual, but the thing I really like about it is not just the building itself - it is its location. It is just up the hill from the beach; it overlooks a row of cottages and then there is the coastal road and the pebbled beach. The view is pretty impressive. It is an exposed place and the salt on the wind reminds you that you're not far from the sea at all.

I love these wee churches with their pretty graveyards. I've been around hundreds, and they never fail to enchant me. I've written about why graveyards appeal to me before, and while I am no longer Christian, ecclesiastical architecture still appeals to me - people have made such beautiful things in devotion to their God (and sometimes, I guess, for secular ulterior motives too) and many of the better-designed churches convey a sense of peace and optimism, or in the case of grand cathedrals, seem to be man's best attempt to build something on Earth approximating how it is in Heaven.  I think some of them got pretty close.


It has its own graveyard. I would think there are quite a few who would like to be buried looking out at sea for the rest of eternity, especially in a community that was for a long time a fishing village. I really liked this Gothic iron fence - the gate seems broken, not closing properly; I didn't leave it open like that out of laziness or anything; I didn't even open it, and I didn't want to fiddle with it in case I broke it more. 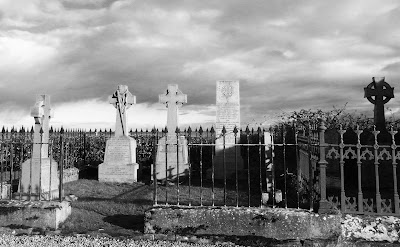 Beyond that row of graves and the hedge behind them is a steep hill and then it is, as you can see behind the fence at the rear, the sea. Rosemarkie faces onto a firth, rather than the open sea, so somewhere on the horizon will be Morayshire - the land between Ardersier and Culloden.

This is just one point on my road-trip, and there will be more architectural photography over the next few days, including the ruins of Fortrose Cathedral. It  surprises me how many truly grand and quite vast ecclesiastical buildings lie in ruins across the Highlands - Beauly Priory and Elgin Cathedral being notable examples.