This building is probably very familiar to all of my readers - it's the Old High Church in Inverness. It's somewhere I really enjoy going, especially the accompanying graveyard, and it is a building I have already extensively photographed, especially the unusual tower. The oldest parts of the tower date from the 14thC, but most of it was rebuilt in the 18thC. There's apparently been a church there since the 500s as it is one of St. Columba's original churches, and there was a pre-Christian religious site before that, possibly dating back millennia as many ancient sacred sites in the area do. 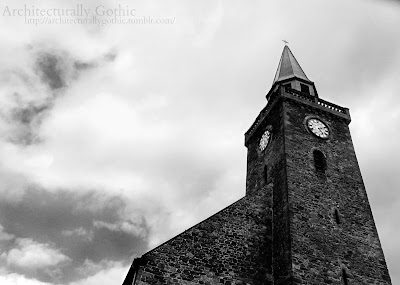 I've finally taken a picture of the Old High Church from across the river! This seems like it would be the obvious thing to do, but for some reason I have never gotten around to doing so. It was such a cloudy day, and this was a lot less dramatic a picture than I would have liked. However, I do think this picture shows how the church is built on a mound - which I have heard called 'St. Michael's mound' - so many sacred hills, hillocks and mounds are associated with St. Michael, but I don't know why. I know some have specific legends, but many don't. If anyone wants to educate me on this, please do! 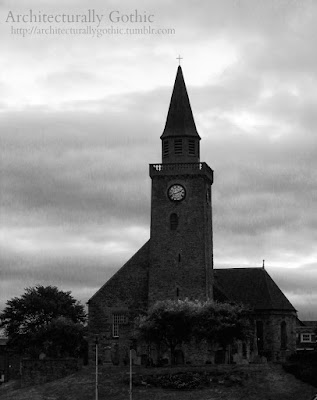 I have recently got LightZone, which I am still learning to use. The first picture in this series was edited with G.I.M.P (Gnu Image Manipulation Program - minds out of the gutter!) and the second I think was with ::PicMonkey:: - a free online photo editing website, where you can do basic edits via your browser, which is what I use for the majority of my selfies. There's a premium version if you want to pay for it, too, which is has more capabilities.  This final picture of the Old High Church is the first picture I have ever tweaked in LightZone. I was very quickly able to bring out the details, and I am getting used to the primary method - the 'zones' which are, in black and white images, areas of a greys within parameters, eg. white, very very light greys, very light greys, light greys, moderately light greys, moderate greys, etc. It's had to explain in words! Anyway, I think it is something where the interface and approach to editing would work quite well with how I process images. 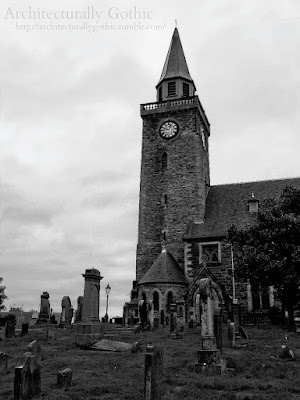 There is a low headstone in the foreground with a notch in the top - that notch was carved as a rifle-rest after the Battle of Culloden for the executioner's rifle. Just out of shot, beyond the left edge of this photograph is a wall, against which Jacobite prisoners were shot. There's still dents in the wall from it. I mentioned this in my Graveyard Walk post, and it's something that really stuck me. It's such a cheery graveyard now - or at least as cheery as a graveyard can be - with a nice view over the river and charming trees and plenty of wildlife, especially birds and rabbits, it's darker history is easily forgotten. It is quite moving to me to think of what awful things happened there.

That's all for this instalment of Photographic Friday. I've got quite a few more blog entries in the works; getting time to work on all of them around college is a bit trickier, but I hope you have all found what I've been writing about recently to be interesting. If you like architectural photography, don't forget to check out my Tumblr ::Architecturally Gothic::. Domesticated Goth also has a Tumblr ::here:: where I post more selfies, links to what I post here, snippets of my life, and also reblog stuff from other bloggers that I find interesting - everything from illuminated manuscripts to Gothic models.
Posted by The HouseCat at 09:00