On the May Bank Holiday (1st May), I went to Spynie Palace Castle with two local Goths and the lady behind ::Superstitchious::, who was there for a rather thorough photo-shoot of herself modelling a new gown design for her shop.  You can see the results of that photoshoot ::here::. While the others were working on the photo-shoot, I took the opportunity to explore the castle and learn a bit of history, and generally get rather excited about visiting such a fantastic ruin. As all my long-term readers will know, I love castles. This post is about the castle, I will do another one about the photoshoot, especially as I got photographed too.

The first thing I will point out about the castle is its situation. It's on the edge of a hill, just past its crest - and not a particularly high hill - with a steep valley visible on the left of the image above (that curve just gets steeper!). That descent leads to a boggy wooded valley with streams snaking across it and lush ground-cover vegetation, and many hundreds of years ago was actually part of a firth, opening out into the greater Moray Firth near Elgin. The castle guarded a port, with parts of it not quite visible in this image that actually backed straight onto watery bits! However, since then land has both been artificially reclaimed, and the coastline has risen slightly. The whole of Northern Europe was weighed down during the last ice-age by the immense pressure of all those glaciers, and since then, northern places have slowly risen back up! Eventually the valley dried up entirely and is now woods and farmland and does not even remotely resemble an inlet, except for the boggy ground, and the river is now a stream. I am so used to places down in Southern England where the fens are getting wetter, the cliffs are washing out to sea (and ending up as sandbanks in continental Europe), and flood risks seem to be increasing, that for somewhere to dry up - especially in a climate as soggy as the Scottish one - is quite remarkable!


I can't resist an interesting window (my trips to ::Rait Castle:: and ::Wester Barevan Churchyard:: are testament to that!), and I especially can't resist one in a wall that tells a story like this. The hall it backed onto was repurposed and resized several times. The rectangular apertures of early windows frame both the smaller Gothic window on the left and the tiny rectangular window on the right. Walls like this - where repairs and alteration are even more evident in colour, as different sandstones were used - tell a story, they're a monument to architectural changes - changes in status, purpose, taste and style. Rectangular windows are Baronial, but this was a Bishop's palace, and Gothic arches are ecclesiastical...

As is clear to see, the castle is in a state of ruin - the tower is still standing, but the rest of it just a collection of ruined walls, window apertures and earthworks. It was apparently rather magnificent in its time, but the waterway dried up, the castle lost its purpose, and eventually it fell into disrepair and then disarray. A roof was put back on the tower to try and halt the process of disintegration, but apparently it caused more problems than it solved and was removed. In some countries, apparently ruined castles get rebuilt, and the (very helpful) information guide was telling me that some tourists complain that the castle hasn't been rebuilt - but I can see the reasoning behind leaving it as a carefully preserved ruin rather than rebuilding.

Photos through windows will always be one of my favourite types of architectural photograph. In this case, I was using the bright spring sky to make the form of the window the focus, with the second thing of interest being the ruined stone wall through which it cuts, and the patch of haze - I think more a camera artefact that any actual dusty or misty air - I need to clean my lens! I think this window has ended up looking Gothic in both the terms of it being a pointed arch window (see the first black and white image) and it having an eerie, almost supernatural quality to it in this picture. I think this is one of my favourite photographs from the trip.


The picture came about as I saw the tree behind the wall, and was given the idea of the wall as a craggy cliff, now that it is rubbly and jagged, with stones jutting out at dramatic angles. I liked that part of the wall was dressed and neat, and that part was rough and irregular, and waited for the light to catch it just right. I just wish the sky had been a little bit more dramatic, but this isn't the end of the universe.

This is an alcove in what was - I think - a hall or a chapel. I sadly didn't have enough money to buy a guide book, and my search on the internet for a legible floor-plan of the castle hasn't really worked out. There's a nicely visible corbel up in the top left corner, which would have supported a sturdy roof beam. I imagine this part of the castle would have been quite splendid in its heyday. I also like how this image shows the contrast between smooth facing stones, and the more uneven stones on the interior of a wall.

This is a picture I took to emphasise the verticality. I'm a rural sort of person, and the castle tower is still a legitimately tall building to me! It would probably be quite tall if transported to the city of Inverness, if in comparison to other buildings there - even their tower-blocks are 7 ordinary floors in height, and the hospital 7 extra-height floors with an 8th level of rooms on the roof for services, and this castle is 6 floors above the basement, and then the remains of a roof-space which is another storey, making it quite a tall building even for the modern Highlands. Obviously, quite short if you live in a city with skyscrapers, or even just lots of buildings taller than 10 storeys. (I think I would find actually being in somewhere like New York or Shanghai with lots of tall buildings quite strange! I found myself quite daunted by the taller buildings of Glasgow...)

The interior of the tower has been partially restored. I think the patches of white stuff are the remains of lime plastering, and look quite stark against the darker stone. When I've been in castles that are still inhabited, the interiors are often plastered, as are the interiors of many old churches, and the idea that everything was bare stone in the past is something of a misunderstanding - yes, not all spaces were plastered, and yes, a lot of historical remains are no longer plastered, but a lot were. It is like how many old English churches are lime-washed white inside, but many centuries ago, before the Reformation and subsequent move towards Protestantism, they were just as brightly painted as many European churches, and many columns and stone elements that weren't plastered were also painted. 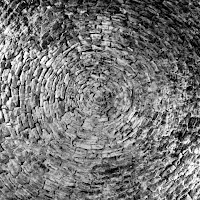 The picture above is looking back up the stairs that descend into some sort of underground cellar (or possibly dungeon!) beneath the castle. It is a round room, with a domed roof, which I tried desperately to photographs, but I didn't have a tripod or stand, the floor was too uneven to rest the camera upon, and the light-levels necessitated a long exposure... I have a picture that's the least blurry of my efforts, but I'm not sure it warrants being here, nevertheless, the construction method was hypnotically concentric and fascinating, so I have included it as a thumbnail to the side. Anyway, this was the light reflecting off the stone walls, and I thought it really rather interesting. There were lights in the subterranean room, hence why the floor is visible, but it was still quite dingy - but at least it was out of the wind!

This alley goes down to a gate, which originally opened out towards where inlet was - I imagine there were once wooden piers or docking areas beyond it, but they are long, long gone. I wish I had taken a photograph that did a better job of demonstrating the three-dimensionality of the other walls and spaces around the alley, but I didn't quite manage. I really wish I could better convey the complexity of the castle spaces, and how the remains still show where rooms and levels once were.

Another photograph that shows how ruined the castle has become, and which shows corbels where beams sat and where alcoves and apertures once were. I find it really interesting to look at old buildings and look at how the remains infer what else used to be there. I try and visualise where the floors once were, what sort of doors they once had, whether the windows were glazed, and if so were they just lead-lights, or maybe stained glass? I wonder how tall walls originally were, and what the roof was like - looking for slots and corbels for where beams once rested, wondering about what I can figure out from the spacing, and what's left of any gable ends. 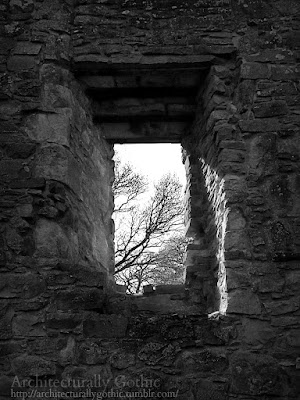 I will finish on another window. Windows are liminal things, between in the indoors and the outdoors, and I find them very interesting. It's a poetic sentiment about perspective that drives my frequent photography of window apertures - thoughts on our viewing things, and the nature of space that I guess are probably a little too much like the architectural-theoretical discourses I read, and which I feel a little overly-abstracted in my thinking, and do wonder if it comes over as pretentious. Perhaps it's enough to just say I like windows!
Posted by The HouseCat at 10:42