A few weeks ago, Raven and I went to stay with my Dad. I came across this castle by accident - My Dad got Raven to drive him on an errand, and the route went past this castle mound, which was partially obscured by how the road goes down a deep cut in the hill below it. I asked if we could visit the castle on the way back, and we did. If any of my readers are familiar with the Mabinogion, then they will recognise Castell Arberth as one of the chief courts of Pwyll, father of Pryderi.

On our way to the castle we went into a cemetery by mistake - we were looking for the path up to the castle mound, and thought this might be through the cemetery, as the graveyard path initially seemed to slope up. The cemetery was founded in the 1930s, so most of the graves are 20thC, I think with some more recent ones. As it is quite a recently used/active cemetery, I only took one picture of the general cemetery area, rather than any of specific graves, and certainly no posing with the gravestones.

The castle was up a different path. You can't see much of it from the road, only one of the towers, but once up there, a lot more of the castle is visible. It is hard, from what is left, to visualise that it was once a mighty fortress, at least the second built on that site, and was built sometime after 1246 (you can read the CADW page ::here::). There were signs around the place with artist's impressions of the original castle, but I think the windows in the paintings are a tad more Gothic than might have been based on the actual window shapes remaining. However, there may have been more pointed tracery in stone frames now long gone.


It was a damp, muggy day, with a dull grey sky, so I apologise in advance for the photographs being hazy and the skies being boring. I took all the photographs on my phone, as well, as I still haven't got a replacement camera. I'm currently unemployed, so it will be a while before I can afford a decent camera.


The most complete part of the building is the pantry/kitchen cellar, with its tough barrel vault weathering the test of time. It's the building that Raven's standing in front of in the picture above. A lot of the stone from the castle was reused to build the town/village of Narberth (Arberth in Welsh) that surrounds. It's a very craggy-looking ruin, and the exterior walls, which would have likely been rendered and whitewashed to avoid the stone walls providing hand-holds, and to add an extra layer of protection from the elements, are now bare, with much of the walls' cores exposed.

The castle was built on a promontory, with a steep drop down to the graveyard below, and even further to the current road level. Geographically, it's quite a defensible location. I think the castle walls merge into a deliberate escarpment to the right of the buildings pictured above. Looking out over the trees now is quite magical. The vegetation there is very lush - West Wales is where parts of what is known as the 'Celtic Rainforest' grows - dense and green, watered by the decidedly soggy climate and warmed by the warm air currents that pass the West of the British Isles, brought by the Gulf Stream.

The buildings were stabilised in 2005, after an extensive project to stop further ruination of what is left. Unfortunately, there has been graffiti since then, limiting what I could photograph (I don't want to put swear words, crudely drawn phallic images and suchlike on my blog) and also damaging the stonework as it would be difficult to remove the spray paint from the walls without also damaging the surfaces of the stones. It saddens me that I often go to castles and other ancient monuments and there's litter, beer cans (and sometimes worse) and graffiti - the results of people disrespecting their heritage. Ones that charge for entry tend to have less, but I think it's more the supervision of stewards than the price that changes things.

I did see a family taking their children for a stroll, which is a good thing - nice to see children being taken to such things at young age, hopefully to grow up more respectful of the castle than those who spray-painted the graffiti. I get really angry about people damaging historical buildings.


You can see corbels jutting from the walls where once sat the joists for the first floor. I don't know if there was a second storey on this part. The towers definitely had ground floor, first floor and second floor at least, probably with battlements behind crenelations. All of that is gone now. You can also see where they changed their mind about a window and walled it up into an alcove.

I probably spent longer exploring and taking photographs than we really had time for. I find such ruins quite captivating. 800 years is pretty ancient in many ways, but it's actually relatively recent in Welsh history. Near Narberth/Arberth is a truly ancient hill-fort that is thousands of years old. It's somewhat overwhelming at times just how much history there is, layered all around us. I'll have to visit more of the really ancient stuff and blog about that, too. 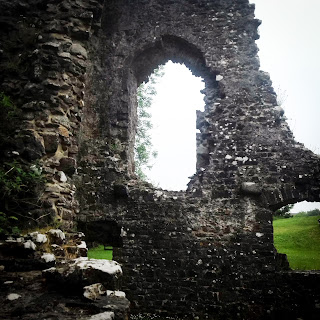 The arches are roughly Gothic, but it's hard to tell what the windows looked like with any more detail than that. The castle, like most medieval castles, also had a chapel, which I would expect to have church-like Gothic windows, maybe once having stained glass. Now there's just a hole in the wall. I wonder what happened to the glass.

Raven took a picture of me looking very serious by a window. I'm such a tourist sometimes - I want an 'I was there' picture of me at the places I visit. You can see how much better the resolution is on Raven's phone camera than on mine. I visited two other castles while I was in Wales, and I'll update my blog with those in the near future.