Another instalment of my 'Gothic Travels', which is something I want to focus on this year. Today's visit is to a 4,000 year old burial ground in the valley south of Culloden. I've been there before, and you can see the previous post (with really terrible photographs!) about when I went there for a Pagan gathering ::here::. 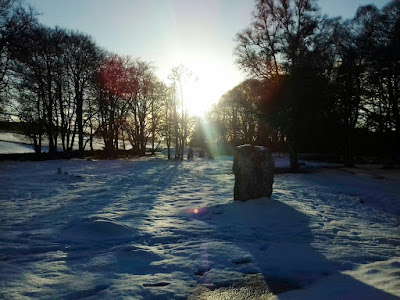 On February 4th, my partner Raven and I visited Clava Cairns near Culloden. We drove there, and parked up at the carpark on the site, which only had a couple of other vehicles. I was surprised that there was anyone else there at all on such a cold and frosty Monday afternoon; the carpark was iced over with compacted snow for the most part, and while it wasn't utterly freezing, it was cold enough not to melt the settled snow particularly fast, and even in what is a sheltered valley there was as a certain chill - perhaps the damp air from the river that runs under the viaduct further along. [The viaduct is pretty impressive, similar to the Glenfinian Viaduct made famous in Harry Potter, and it too has a railway crossing a valley, but this one is pink rather than grey; I will give it its own post].

I apologise for the lack of clarity and resolution in my photos - my camera broke last summer and I haven't been able to afford a replacement since then, so I'm just using the camera on my phone, which is average at best. Please click on photographs for expanded versions, especially the thumbnails.


There's what appears to be a small cairn in the carpark, just outside the boundary to the main complex of cairns. As it's not listed on the maps, and it's not in the enclave, I think it might just be a pile of rocks from levelling a flattish plot to make the carpark, or maybe an 19thC folly addition, or even stones removed in the 19thC excavations of the cairns; basically I don't know what it is at all.


Clava Cairns is specifically 'Balnuaran of Clava', as there are other groups of cairns known as 'Clava Cairns'. There's also a ruined chapel and another cairn at the far end of road, which I have visited before in the past, but didn't visit that day. Nearby there are two other cairns in an overgrown field across the road from the enclave run by Historic Scotland, and also a standing stone in a field that sometimes has I think cows in it. Either way, the other two monuments and the standing stone are not open to the public as monuments, and while there is some freedom to walk in Scotland, these fields often have livestock, so going in them could cause a problem (Highland Cattle/Heilan' Coos are very cute but they are large animals with big horns! Be considerate of cattle and farmers if visiting.


The enclave around the cairns is of old trees, planted between 1870 and 1871 by the land-owner at the time, who had the Romantic notion of the cairns being a 'Druidic temple' so wanted to plant it into a 'Druid Grove' - I think there are a few Neo-Pagans (Celtic, Druidic and otherwise) who are quite grateful for that, because it really does give the site a beautiful atmosphere of being encapsulated by nature, something simultaneously apart from the world and deeply within it. I'm certainly neither the first nor the best photographer to take advantage of the late afternoon light streaming between the branches and trunks of the trees, and I felt that the melt-water and ice from where the snow had been defrosting certainly did something to make that extra-special.


The cairns are approximately 4,000 years old, and they were used as mausoleums of a sort. There are three large cairns and one small kerb cairn. Two of the large cairns have passage entrances aligned with the setting sun on the winter solstice, and the centre cairn is a ring cairn - a central sealed chamber with no entrance, a sort of stony donut. I've read that the stone circles around the cairns were set after the cairns ceased to be used for new burials. The ring cairn in the centre of the three is almost a wheel design, with the ring cairn as the hub and low stone walls as spokes out to the standing stones beyond. I think the standing stones are also on a celestial alignment.

The far cairn is the smallest full cairn other than the kerb cairn. There used to be an infographic explaining the sunset alignment at the cairns, but I can't remember if it's still there, and if it was, it was buried under snow. I think the far corner cairn has a cup-mark in a stone within it, and was re-used as a columbarium around a thousand years after they were made, in approximately 1,000BCE. It was excavated in Victorian times, but it wasn't excavated with the modern techniques of archaeology, and a lot of data was missed, lost, or destroyed. I don't know if they disinterred any remains, and if so, what happened to the person who was buried there, but from what I gather, the cairn was the victim of overenthusiastic dilettante archaeology in the 1870s.


In South East England, where I grew up, there was a theory relating the placement of barrows to either be prominent on the brows of hills, or to be near rivers, and while I think the builders of the cairns at Clava may have been culturally different, the cairns are hardly on a hilltop, but they are in a valley with the River Nairn flowing through - but I'm not an archaeologist (yet... I'm doing my second undergraduate degree part-time, studying joint History & Archaeology), and it is something I would have to read up on. There's been some interesting papers on the placement of chambered cairns on the Isles, but I don't know about the mainland. Definitely something I need to look into.


The Cairns are very popular in recent years due to the success of the show 'Outlander', as apparently there is some connection to the series. I haven't watched much of it, and the opening scene with early 20thC 'Druids' was filmed on a set on a hillock with foam stones, and Clava Cairns is apparently not the site mentioned in the books (a better candidate for that would be the stones that remain of the cairn at Dunain, which I mentioned in my previous blog entry about Ostara), so I'm not sure what the exact connection is, but it's something to do with magical standing stones as part of the time-travel in the story, from what I gather. They've actually become too popular, and have been damaged by people climbing on the stones, and on the cairns, dislodging parts of the rock walls of the cairns. Large coaches and heavy traffic have also caused an access issue for the garage that runs recovery/road-side assistance from a little further down the road - and therefore for the clients they were off to rescue from mechanical trouble. If visiting during busy season, I would suggest parking elsewhere and walking down, as it is a pretty and pleasant walk (there are also several B&Bs, chalets, etc. nearby for accommodation.).


The ring cairn was buried under snow, as was a stone with cup-marks tooled into it. When we got to the far end of the cairns, a tour-bus arrived with a medium group of tourist, and the peace of the place felt broken, so we walked off to get a better look at the viaduct instead. I must go back there again this year, and take photographs in different weather and seasons. I follow #ClavaCairns on Instagram, and a lot of beautiful photographs turn up in that hashtag, which is quite inspiring. Hopefully I'll be able to afford a new camera soon, and thus able to work on bettering my photography. For now, I am doing my best with my smartphone and some basic editing software.

As a historical site, I thoroughly recommend visiting them, just to get a sense of the size and scale of these cairns. As a Neo-Pagan, I visit to reconnect with the sense of place, with spiritual ancestors and those past practices that inspired me to a nature-based spirituality.

It's also just a pleasant place to be. There are some picnic tables near by, plenty of wildlife lives in the area, and the trees are rather lovely. Apart from solemn contemplation, it's nice to enjoy yourself, and I don't think it is any disrespect to those who were buried there thousands of years ago - as long as that doesn't spill into the sort of exuberance that could damage the monuments or make it so other people can't enjoy their time there too.
[My apologies for the formatting errors with the pictures; the blogging wizard keeps putting breaks/paragraphs where I don't want them, even when I remove them in the HTML editor...]
Posted by The HouseCat at 06:07