Columns, Sunsets and Skies (and no zombies)


I have not been posting much recently because I have been really busy with my professional art and even busier at work - especially in my new role as choir mistress, as we now have Christmas celebrations coming up and I am running them through traditional carols. Running a choir is a LOT of hard work!

I had so much Hallowe'en-related stuff to post that I never got around to that I have decided to schedule it all for next Hallowe'en instead. I made very easy folded paper leaves (they are so simple that they don't count as origami!), made several designs of paper-craft cards, made my own Halloween wrapping paper, designed the pumpkin (which features a portrait of my cat), dressed up in two different costumes (including turning up at work dressed as a pirate for not one but two Hallowe'en parties I helped at), done my own fancy make-up, and decorated the house for the occasion. I was also going to write about Samhain, which is what I actually celebrate... Expect all that next year instead.

I also have excellent news - I am now an aunty! My little sister gave birth to a baby girl last week. She's really cute in all the photographs, but I haven't been able to travel to England to see her in person yet. I am very excited to be someone's mad aunt :-3

I also have the grumpy news that I have a stinking cold/possibly the flu and am hiding in bed where my anger at being ill can't be taken out on anybody too much, although I am driving poor Raven up the wall. I might as well do something useful, and post something that people will appreciate, and I intended to put these up last night, but they're going up here today instead.

Architectural Photography
I went out a couple of weeks ago and took these pictures. I really liked the light late in the afternoon. The nights are drawing in early, and it starts getting dark at around 15:30hrs, and even before then the light is already dimming, and it gets light quite late, too. Soon the days will be very short indeed. 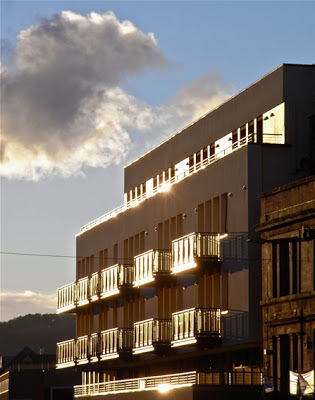 Anyway, as you can see I have been out enjoying the autumn evenings. I love taking photographs in the evenings, as the shadows really bring out the various planes of the buildings. Buildings are often made up of lots of flat planes, especially modern buildings that focus more on form than ornament for visual interest, so they can look flat and dull, more like a pattern than a three dimensional structure. I have no idea what this building is called or who designed it, but it is overlooking the main street towards the bridge and is fairly recent. I saw the sun gleaming off the balcony railings and just had to take a photograph of this moment before the sun shifted and the gleam went. The sky was blue with perfect fluffy clouds. 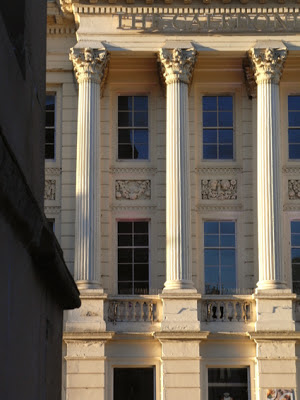 This used to be the Inverness branch of the Royal Bank of Scotland but is now The Caledonian, a Smith & Jones pub (Raven went there for part of a night out partying for Hallowe'en, it's apparently quite nice.). The building in the foreground is the Town House, which I have featured before in ::this:: post. Unlike most Invernesian buildings of that period, it is Neoclassical rather than medieval inspired Gothic Revival or Scottish Baronial. There are other Neoclassical buildings in the city (notably chapels) but in general pointed arches prevail over fluted columns. Of course, Neoclassical has been a preferred style for banks seeking a style that embodies balance and order, unlike the fancy and fantasy and spiritual (church) connotations of Gothic Revival architecture. Famous banks built in that style include the Bank of England building in London by Sir John Soane. Oddly, I always thought that the pub had previously been a theatre, until I saw an old photograph from when it was still a bank. 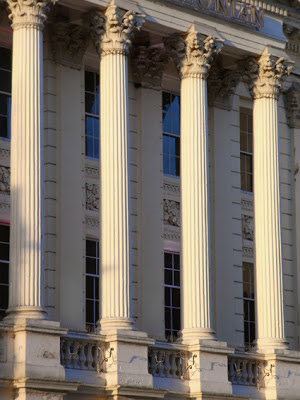 The pink around the window frames is from the coloured lighting they have to illuminate the building at night. Something similar has been done with buildings around the railway station and the library, both also Neoclassical architecture. While it is very pretty, I do wonder about all the electricity used, and ponder about if such lights should be turned off at about 22:00hrs, but I'm perhaps being the overly-green fuddy-duddy. Anyway, I like the columns - it's a facade in the Corinthian style, with acanthus leaves on the column capitals, fluted columns and an entablature and pediment with figures in the tympanum, but I didn't get a clear photo of that part of the building (I will have to try again).

I would really like to find out more about the history of this building, who designed it, when it was built, etc. but am not sure where to look. I'd also like to find out exactly what the statues in the tympanum depict. My first port of enquiry will be the local library, and then the museum. 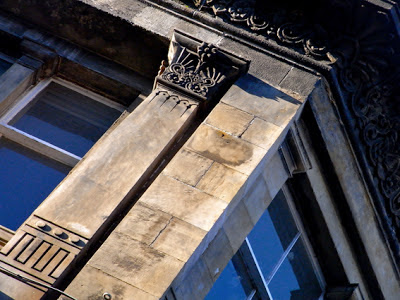 The Caledonian is not the only Neoclassical building in Inverness, as I have previously mentioned. This building is on the corner of Academy St. and Baron Taylor St. (or the next one over) and is a mixture of Art Deco and Neoclassical sensibilities. There's probably a name for this sort of style, but I regret to admit that I don't know it. It's quite ornate, but all the forms have been simplified. This is actually the one of the first photographs (all of this building) I took on that afternoon, and the sky was still quite blue.

Hopefully my next blog entry will be a little more Goth, rather than just some photographs of interesting old buildings. While I really would love to learn when various local buildings were built, in what order, and with what modifications, I'm not sure that everyone else reading my blog would be interested, and if I wanted to go down that path, I would be better off starting a blog uniquely about architectural history.
Posted by The HouseCat at 11:55