This is the most Gothic I have so far been at work... 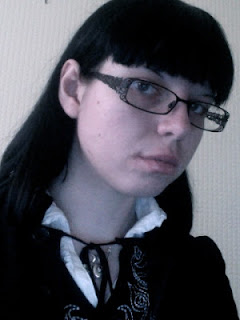 Ok, I don't really like doing outfit posts, but I'm too sick to do anything that requires much more thinking and effort. I'm not a fashion blogger, and I'd rather write about architecture, or music, or books than clothes, but this sort of post is fairly easy to put together, doesn't require research and fact-checking (I just don't have the concentration for that, today), and doesn't require me to stand outside in late November in Scotland taking pictures of buildings when I've got the 'flu. I am also bored out of my skull because most of the stuff I'd rather do right now is either impractical or in one way or another too strenuous. I'm supposed to be recuperating! I got into work yesterday, and was fine, tried to go back into work today, got about an hour into it, and got sent home sick again. I am not amused! I would much rather be at work. As you can see, I get really whiny when sick because I hate not doing anything!

Anyway, without too much further ado, an outfit post. This is what I wore into work this morning, well from the chest up (the rest of me is in bed; I took these on my laptop, hence the lack of quality.). As you can see, my outfits are getting a tad more alternative in terms of Gothic, anachronistic and Neo-Victorian influences. It is now common knowledge that I am Goth amongst the rest of the staff at work, and they don't seem particularly bothered. I actually have had some rather interesting conversations with one colleague about '80s Goth, Post-Punk, Darkwave, etc. because it turns out we share some tastes in music. I get light-hearted ribbing, but nothing malicious.

All that said, I don't want to dress Goth for work, and I still want to be work-appropriate in my outfit choices. I am also trying to think outside of only practicality in terms of my dress at work, because now it is cold I tend to be wearing black office trousers, lots of socks, blouses and vests hidden under thick jumpers, and as part of my job is outside, often hiking boots (mostly because of the grass, leaves, mud, etc. and slippery slopes) and then other shoes for indoors - this is warm and toasty and practical, but it is also a very bland look. My coworkers are turning up in skirts and dresses and I'm feeling a little left out, so I'm trialling wearing layers rather than thick jumpers, and skirts (with layers underneath) rather than always trousers.

If I am going to wear skirts to work, I will need to buy a few more work-appropriate ones; I have a Marks & Spencer's velvet pencil skirt (bought cheap in a charity shop) that goes well with this jacket, and a relatively plain black A-line skirt with a gathered section at the bottom, but I think it might be a tad too fancy for work, and then the rest of my skirts are far too fancy for work. I felt the suit-type outfits I was wearing initially were more suited to an office than a school, and were overly formal, but I tend to err towards formality at the best of times.

This outfit is all from mainstream stores (originally; I tend to shop in charity shops or from e-Bay). The blouse was bought for £1.99 in a charity shop (bargain!) and is actually quite detailed and frilly, almost to a Lolita-esque extent (I'm actually thinking of wearing it in some Aristo outfits), so I've hidden some of the fanciness under a tie-neck jumper with white scrolling, almost foliate embroidery, which  is originally from Marks & Spencer and which I bought on eBay at 99p! (Definite bargain!). The velvet jacket is Laura Ashley, and was gifted to me by Raven's mother (who is a very stylish lady indeed.) and I love the sleeves on it, and the gathers and puff at the shoulders. I have a lot of garments that have huge Gothic potential that were originally either Marks & Spencer or Laura Ashley, and I think from Autumn/Winter collections. I think I would buy a few new things from them if I had that sort of money, but for now I will glee over my second-hand bargains.

I'm not wearing any make-up in these pictures because a) I tend to wear very little makeup to work anyway; I feel too much makeup looks unprofessional and b) because of the skin infection, especially around my lips (I think even in these washed-out pictures some of the redness around my mouth is visible, and it is clear my lips are a bit swollen, and this is after considerable healing.) I'm quite glad that these pictures are grainy and washed-out because it hides the fact that I'm dead pale with a red nose, horrible skin, peeling on my lips and a runny nose. Hurrah for terrible onboard cameras!

As you can see, I have dyed my hair black; this was a bad idea as I spent a week with a really itchy scalp, sore eyes, blisters on my ears and neck, and generally came to the conclusion that I am STILL allergic to black hair-dye, and that this is never going to change. I guess I will either have to suffer, or revert back to plum and burgundy, which don't seem to have much of an effect on me. That said, I still think I look best with black hair, and I do have some nice wigs.

That's all from me being a prim and proper schoolmarm! Have a nice day, everyone, and I hope you are all feeling better than me.
Posted by The HouseCat at 05:02