Rait castle is located roughly two miles south of the town of Nairn, and about sixteen miles east of Inverness. A modest castle in my opinion, it could easily be mistaken for a derelict chapel or church.The castle is reported to be haunted, but this wasn't a ghost hunting trip, and it was far too bright a day to tempt out anything spooky! 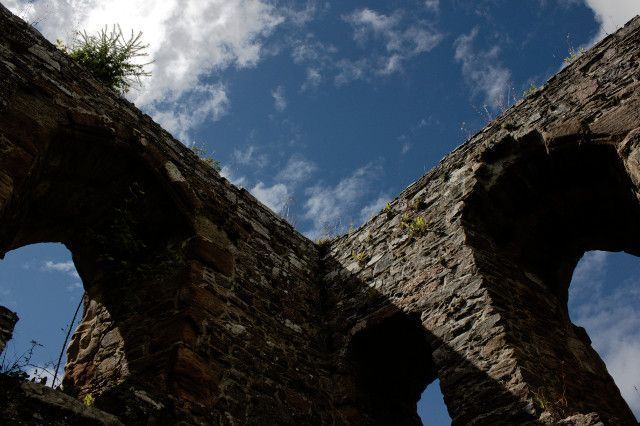 The image above is a simple one, I liked how the shadow matched the line of the top of the wall. All I had to do was line up the shot and hope for the best.
I decided to keep the sky a slightly desaturated blue as I didn't want to detract from the detail in the walls, which came out really nicely with a slight tweak of the contrast.


HouseCat: I really like this photograph, for its balanced composition and very unusual angle. I don't think I've actually seen an intersecting walls photograph quite like what Raven has done above. This has got to be one of my favourite photographs by him. I need to persuade Raven to print one off for our walls! 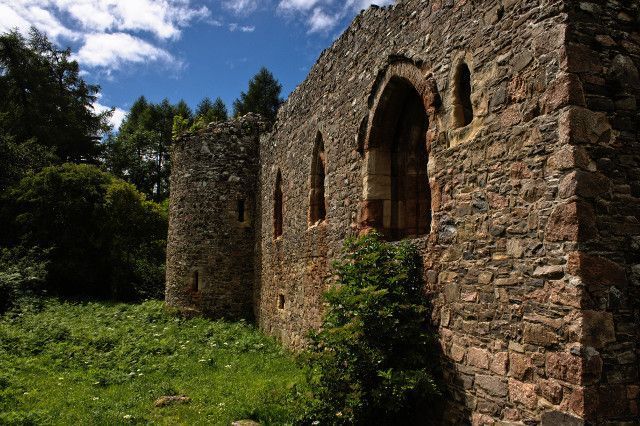 Here we have a classic angle of the castle - simply google "Rait Castle", and you'll see what I mean. I am pleased with the way the colours came out on the walls, and the way the reds pop out against the greens of the foliage.

HouseCat: There are indeed about 10 photographs from a similar angle on the first page of Google Images - not something we actually looked at before out trip to Rait Castle! I think this is the most obvious angle from which to take the castle, partly because there is actually enough clear ground on that side of the castle to step back far enough to get the whole length of the castle in one shot, which there isn't on the other side. One thing that is interesting is how every photographer's image, even from very similar angles, has different results. Weather, and thus lighting, is certainly one factor, but each photographer has chosen a slight difference in distance from the castle, or angle to the castle; different cropping, different saturation. Raven and I went to the same place and chose completely different sections of the building, but even between photographers who chose the same things, there's a lot of difference. 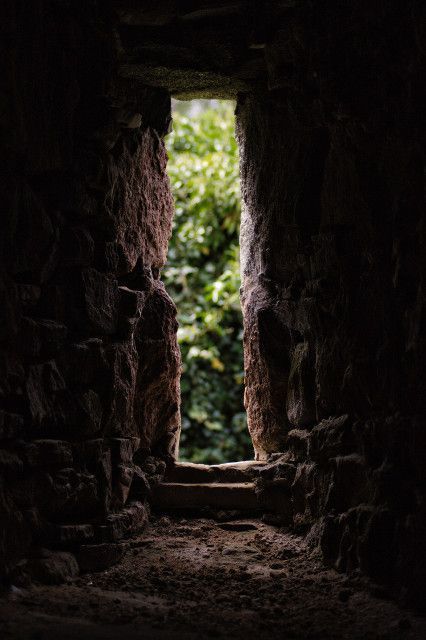 This one is one of my favourites... Simple but effective, in my opinion. I enjoy taking photos like this one. I think it is because of the way the light bleeds in, highlighting details that would be otherwise washed out if you used a flash, or if it was in broad daylight. 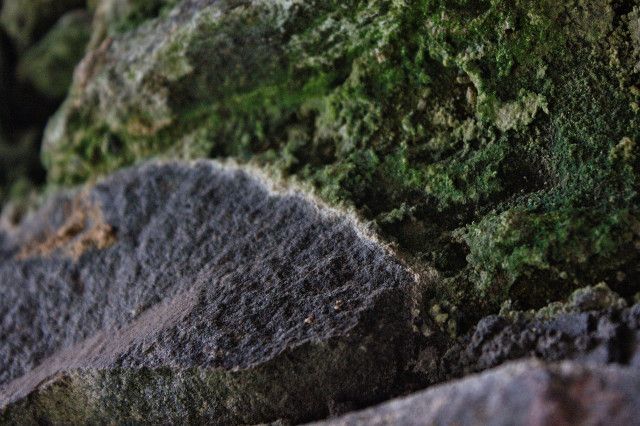 This is a macro of algae on the wall. Nice and simple again... The thing that drew me to the shot was the clear division between cold rock on the wall, and this lush green algae bursting its way in.


HouseCat: Raven has a very good eye for small details, things that most people would miss. The world is very interesting if you pay enough attention to spot the fur at the edge of the algae in a crevice of a wall! 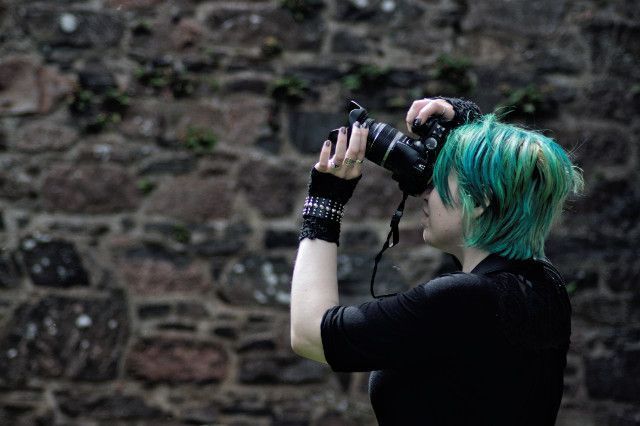 Shots like the one above are what I like to call "grab shots". I saw the House Cat taking a photograph (using one of my lenses) so I took the opportunity using my telephoto, which proved effective by blurring out the background, and really making her stand out in the image.


This was me taking those photographs of the windows on the upper storey of the castle. Usually, when I am not actively modelling, I try and scurry out of photographs because I'm not really very photogenic without making the effort to be (I discard half of my selfies because I end up looking ungainly with a weird expression on my face!). I think he's managed to get a good composition for a photograph that was taken slyly as I concentrated on making adjustments.

In summary, it is a lovely little castle, and I hope it stays protected for a long time to come. I found myself imagining what it would have been like in its day, and what kind of people walked it's hall.

This is a graveyard we drove past on our way to Rait castle, and we agreed that it would be a good idea to stop there on the way back... Which we did.

This is a very old grave yard indeed, and a rather pleasant one at that.I have always found grave yards to be quite cold, but this one seemed rather welcoming in an odd kind of way... almost as if it liked being visited from time to time.

Another two photographers were in our group - Suzy Bugs, who was taking only wildlife photographs, so is not taking part in Architectural Photography Week, and a Goth-y friend who goes by the screen-name Hemlock. Hemlock lives in the area and knows the countryside there pretty well, and it was he that pointed out the farm track to Rait castle (so we didn't have to park at the side of the road and hike the steep way up!) and also pointed out this graveyard. 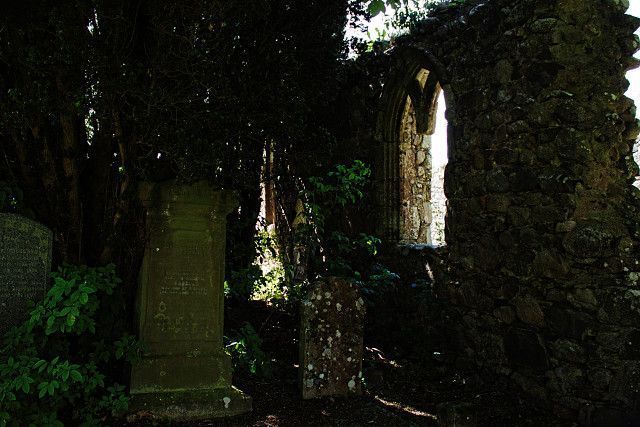 Here is an image which really caught my eye... I don't think the photograph does what I saw justice to be honest. I found the way the light gently flowing through the trees onto the stone and foliage was quite eye catching.


HouseCat: I tried to take photographs of  chapel from this angle (not realising that Raven was too!), and I could not get anything as pretty as this; it's a testament to Raven's skill that he actually got something where the all the different layers and light levels in the image, from the brightness looking into the chapel through that window, to the details of the stones in the shade, are visible and nicely captured. 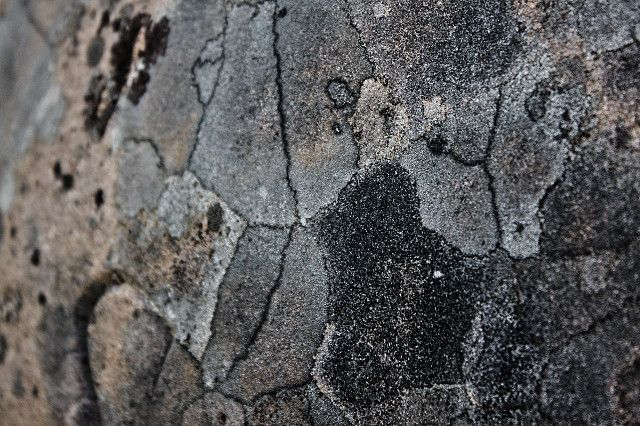 Here is a simple photograph, which was initially intended to go in my texture library. It is a close up of a large stone sphere. I liked the way the structures of the rock are revealed through the polishing of the sphere, and through weathering over time. This is located in a smaller section, which belongs to the Cawdor family. 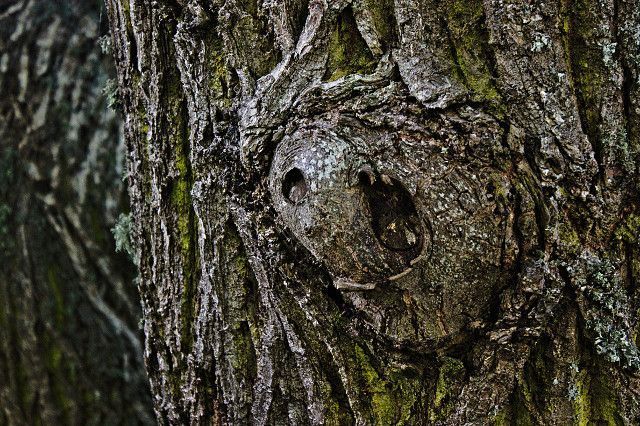 And here, we have the final image from my little set... The watchman. He can be found watching over the graves in a tree in the corner to the left of the gate as you come in.This character seems to get mixed reactions off different people. Some think it's creepy, having a face in a tree (which is totally natural, I might add!) but I, personally, found its smiling gaze to be rather endearing.

All in all, a great day was had by everyone involved, and it was nice to catch up with a couple of friends. I'll have to get back to Rait castle and do a shoot with a model or two at some stage, but anything like that is a way off yet!

Housecat: I volunteer to model, but Raven is probably sick of taking pictures of me! I hope you all enjoyed today's guest post by Raven. Hopefully Hemlock will be sharing his photographs from the trip tomorrow, and I will be back on Sunday to finish architecture week.

Raven's photographs are NOT under the same "share if you properly attribute them to me and link back" rules as mine. I do not take photographs as a means to earn money, but he DOES, so please respect his work. If you want to share these photographs, share a link to the blog, rather than sharing the photographs themselves. Both of us will be every unhappy if we find our work being used commercially. This applies to all of his photographs on this blog, not just the ones here.
Posted by The HouseCat at 05:00