In which I show that I am indeed slightly obsessed with windows.
I organised a photography trip last Sunday to Rait Castle with Raven and a couple of friends. I'm starting off with my photographs, and have asked those that came with me if they would like to share some of their photographs of the same day, and these will be displayed in a couple of days.

Rait Castle is a ruin between Nairn and Cawdor, on hill near some woodland, and overlooking the A939 and is an odd sort of place to, as the road to go towards it means taking a road away from it, as there's no direct access from the A939. It looks like a ruined church from the road due to having a tower and Gothic arched windows, but it was in fact a small and mostly non-defensive castle; the ground floor windows are narrowed and designed to limit access, but the upper windows being so large mostly negate this, and there are no earth-works and only small compound walls. It was more a grand country residence than a fortified structure.

That said, it has a bloody history as can be read ::here:: on the Rait Castle website, and there are stories of the ghost of the murdered daughter. I had read all of this before visiting, but bloody family feuds and murder aside, there was nothing eerie or creepy about the castle itself. It is ruined, and I am sure it could look creepy, especially on the shaded interior, in the right weather conditions, but it did not feel creepy. There is, however, a ruined structure behind the castle that is largely overgrown and that does have an unnerving aura about it. According to the Preserve Rait website, it is likely the chapel. It is all over grown with brambles, wild roses and other sharp and woody thorns, so I was rather discouraged about exploring it. It gave me, and the others in the photography party, what I would call 'the heebie-jeebies'. Maybe the young maiden went to the chapel to beg God's aid mortally wounded, with her family slain around her, and maybe that is where she finally died... 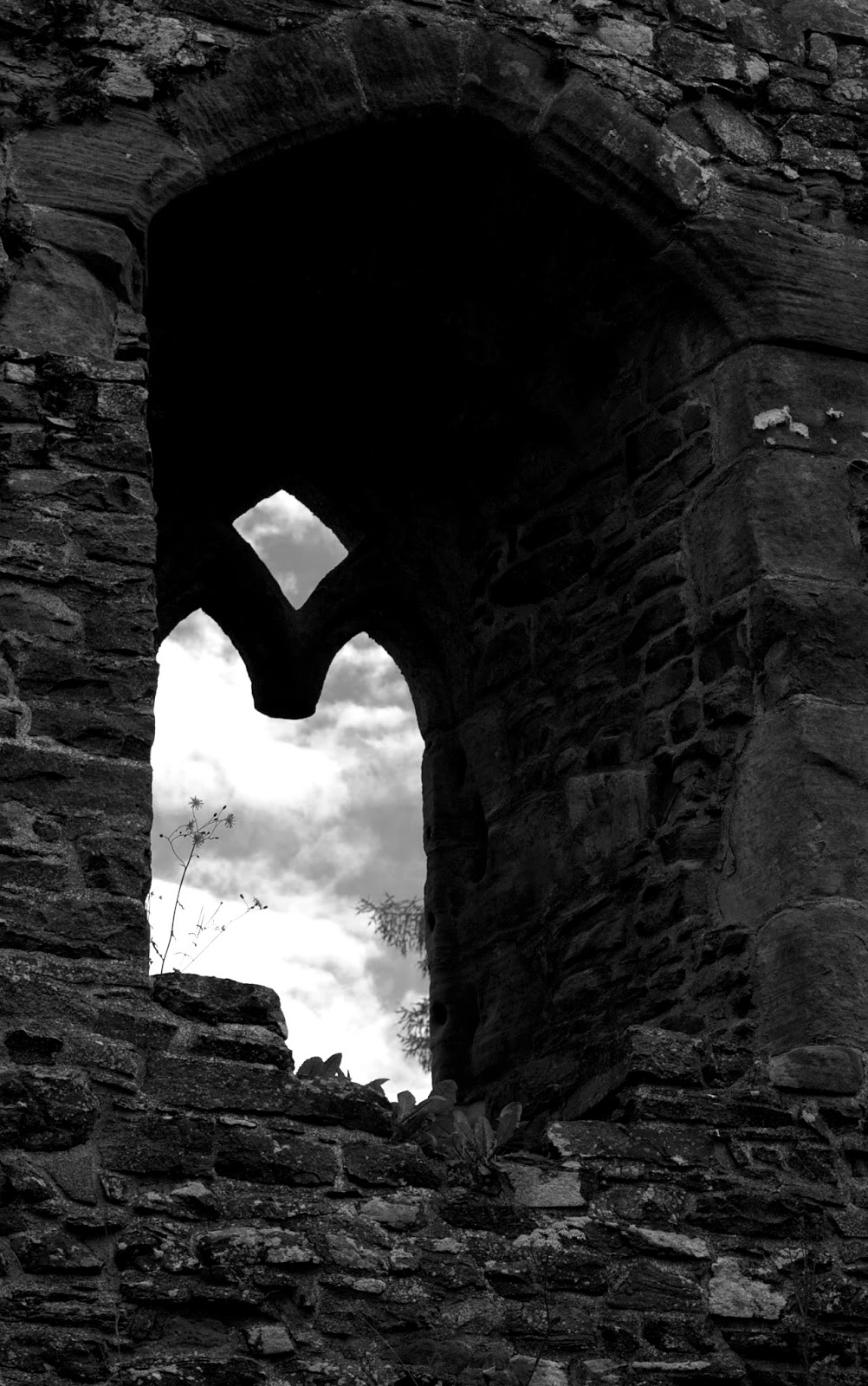 I have something of a fascination with the windows, and with windows in general. This is something that comes very much from the design geek within me, and I am a little afraid to share my thinking here lest it come across as pretentious art-school nonsense. I especially like the windows through old thick walls like here at Rait Castle because they create their own transitory alcove space, up to whatever grille or glazing would have been there. Empty windows dividing an outdoor space are certainly something I find really interesting, especially when nature has sprouted plants on what would have once been the interior, and when whatever roof once made the interior an interior is gone, so while the window still provides a view between spaces, the fact that they are all really part of one space is visible.

For a long time creating sheets of glass like we have today was pretty much impossible, and only small pieces of flattish glass could be made, so if one wanted a big window, it had to made up of lots of little bits leaded together. In some cases, windows were just a very narrow gap that could be shuttered or curtained in bad weather. I didn't actually spend that much time trying to figure out how the windows at Rait would have been, but I guess that the big Gothic arches with their lovely carved stonework may have had leadlight windows, possibly with stained-glass sections for heraldry. I'm not sure what window the girl who lost her hands tried to climb out of, but having looked at how narrow most of them would have been with the central pillars intact, she must have been very slight; it would have been more reasonable that she tried to climb out of the upper door. 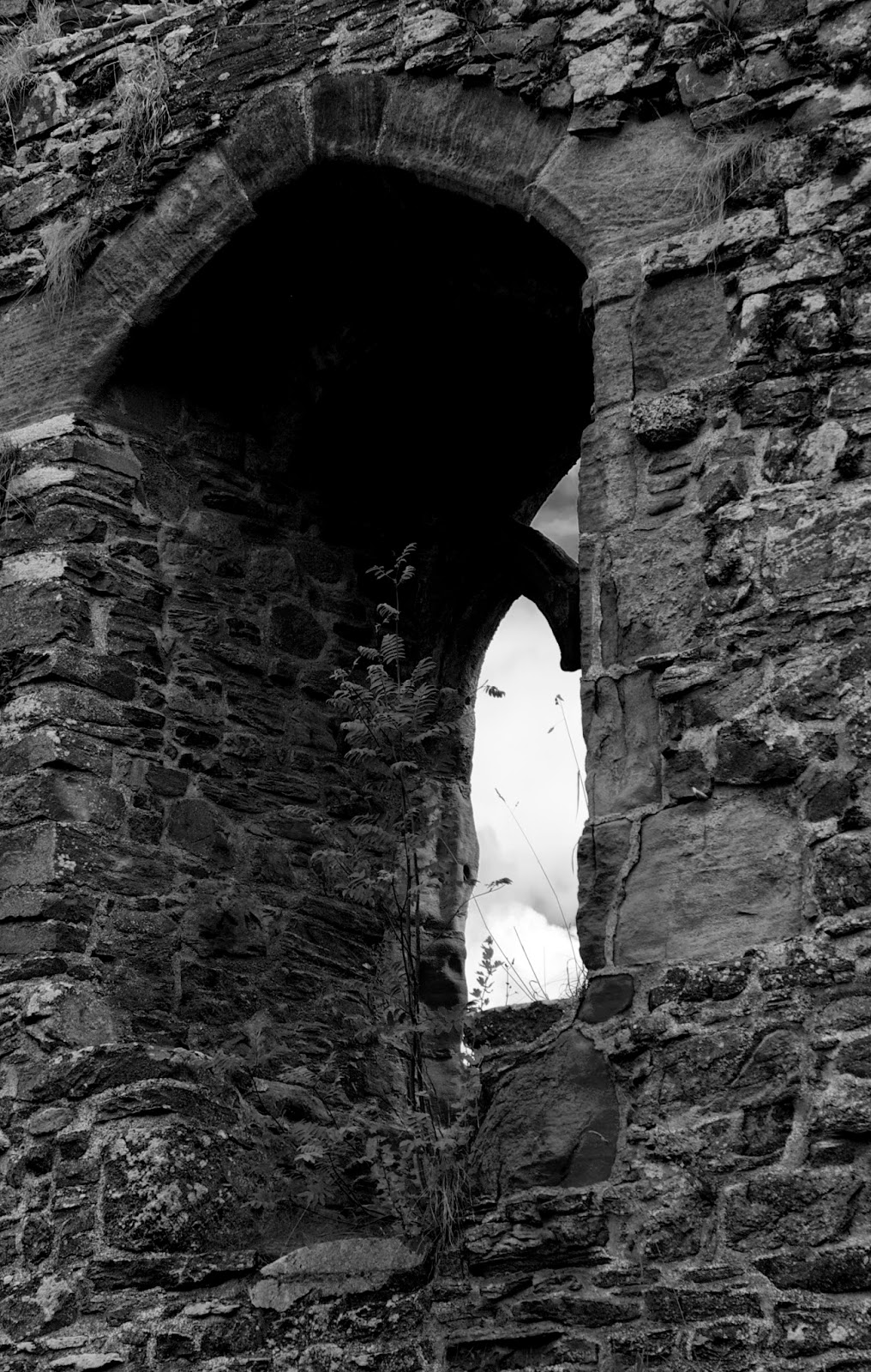 I am curious as to how the building lost its front wall when the rest of the stonework has remained pretty intact. What remains of the front wall is very sturdy, and I do wonder if stone was deliberately taken from it rather than it crumbling or collapsing over time. The walls are several feet thick and built to last; the main threat to the building is the vegetation, as roots can penetrate small cracks and then grow to slowly push things apart. The roof would have been wooden, possibly slated, and I can imagine it being robbed for slates and the beams rotting over time. Considering how old it is, and for how long it has been abandoned, it is remarkably well preserved.

Tomorrow I will be posting about Wester Bareaven Graveyard and the ruined chapel there - I got to borrow a Nikon, as my Canon had run out of battery, and I had a lot of fun photographing mostly the chapel ruins.