There are two International Lolita days, one in the summer on the first Saturday in June, and one on the first Saturday in September.  Personally, I am more of a dabbler in Lolita and prefer dressing in Romantic Goth as there's more variety of anachronistic fashion to choose from, but I certainly rather like wearing Lolita fashion, so I thought I'd put together a co-ord (outfit) for International Lolita Day.

International Lolita Day was founded back in 2005 as a day to wear Lolita in public, raise awareness of the fashion/hobby/lifestyle that Lolita is, and to try and meet up with other Lolitas. Lolita is not a well known fashion style amongst the mainstream - its more Gothic incarnations often get confused with Goth (understandable, as Gothic Lolita is a hybrid of Goth and Lolita fashion) and the other variants are often assumed to be some sort of costume. I've heard a lot of Sweet Lolitas have people assume that their fashion is some sort of age-play fetish - while I guess it is for a minority, that's certainly not what it is for most sweet Lolitas! Thankfully Lolita does not have the same 'Satanic' and 'evil' reputation as Goth has been ascribed by the ignorant, but it's still not fun when people assume things about wanting to be a 'living doll' or that it is some kind of fetish when it isn't. 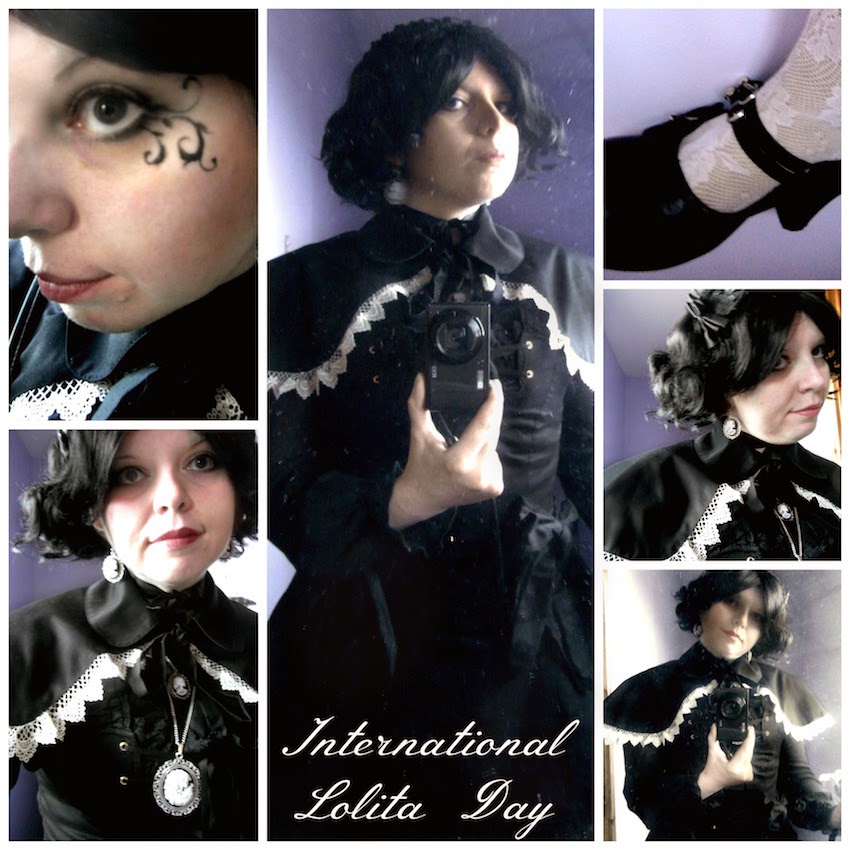 My outfit was deliberately quite Old School and while there were certainly Gothic touches (the skeletal maidens on the cameos, the skulls on my shoes) most of it was of a more "bows and ruffles" sort of style. I wanted to make this co-ord distinct from the very Goth stuff I normally wear. I think my Lolita outfits are improving with both practice and an expanded Lolita wardrobe. The eye-swirls are not typical of Lolita, but they're sort of a signature make-up style for me, so I was not going to leave it out! Any constructive criticism is welcome. I apologise for the photo quality - usually I would get my partner to take pictures, but he was on night-shift and I didn't want to wake him up during the (very short hours of daylight) day just for some outfit picturess! As such, really bad quality selfies will have to do, and there's no full-body shot, only what I could get in the half-length mirror.