These were taken before the Christmas holidays, when I was on my lunch-break from work, having taken the bus into town. I have a later lunch than most, so it was mid afternoon when I went for my break, and the weather was rolling in to get dark early - earlier than the roughly 3:30 time the sunsets seem to start in the depth of winter here. Inverness is surrounded by hills and mountains that significantly raise the horizon, meaning that the sun has far less distance to go to set, plus, for American readers, we're a wee bit further North than Sitka in Alaska (for comparison's sake) and to European readers, we're similar to Yaroslavl in Russia and a bit south of Gothenburg in Sweden! Anyway, the general result of the cloud and latitude and season was to create some rather atmospheric lighting and I took the opportunity to take these photographs in the city.

This is the Free Church of Scotland on Bank Street, as seen across the graveyard of the neighbouring Old High Church. I think this is the first photograph I have taken of it from this angle. The clouds rolling in are pretty dramatic in this photograph, and I think it best captures the weather.


I took a few photographs of the church tower from very similar angles that day. I read in the papers recently (I think it was the Inverness Courier...)  that the congregation can no longer afford the insurance, and that it may have to close. I think that would be a vey sad fate for what is a very beautiful and very old building. I hope that their fundraising goes well. 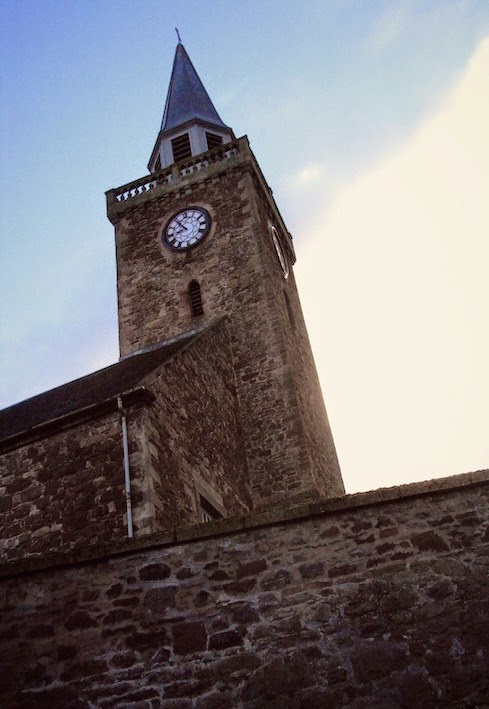 Here is the same building again, this time in colour, and from an almost identical angle. I think in colour the low sun is more visible, and the warm reds of the masonry. It's a lovely, lovely old church and has been a city landmark for centuries - I really do hope it manages to get funding both to remain open and keep the building in good repair. I am not Christian, but I do appreciate good architecture, and I do appreciate the role the various churches have in the community locally (I know that they run a lot of local charitable ventures, and are linked to the food-bank, etc.), so things like the possible closure of this church make me sad.
Posted by The HouseCat at 13:57