Medieval Gothic art - and especially Gothic architecture - is the deep tap-root of Goth; it is from the old Gothic architecture of castles and abbeys that formed the settings of the early supernatural horror novels that the term "Gothic" was applied to them, and from those novels that the idea of Gothic meaning things that are dark, supernaturally spooky, atmospheric, and a mixture of darkness, the sublime and the terrible - and it is from that meaning, combined with the (broadly inaccurate) idea of the Germanic Goths being barbarians that the term "Goth" was applied to the fans of the music that would later also be called "Goth".

As such, I decided it would be interesting to take direct influence from this for my makeup. Over the eyelid are three arches of increasing size with marble-painted smaller arches within them. The eyebrows and above them have tracery based on Gothic windows with pinnacles, crockets and and trifoliate designs. Under the eyes are two "clock-hand" inspired designs drawn to balance the upwards designs above the eye. 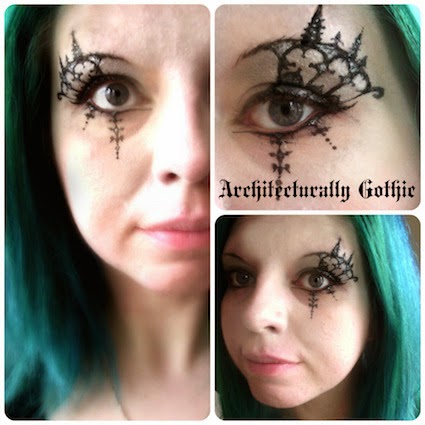 This is my first attempt at drawing anything based on Gothic art and architecture actually ON my face, and I found it really hard to draw over the contours of my skin, and to draw with any accuracy in a mirror and where I could not rest my hand on anything to steady it. With the eyelids I used primer instead of foundation as the basis and then did a gradient of silver and pewter eyeshadow, then drew over that in eyeliner (using a narrow brush and a broader brush), then filled in the details with a silver eyeliner pen. The marble-painted sections were painted using water and powder eyeshadows and a water-colour brush (one assigned exclusively for use with make-up!).

I would really love advice on how to do something like this more neatly. I'm quite happy with how it already turned out, but I would prefer to make it neater and have more accurately architectural details, and arches that look much pointier. As I mentioned before, I found actually drawing over my eyelids very difficult. The organic forms of my swirlies are more flowing and this easier to paint across an uneven surface, and are often drawn over the bony parts of my face, so are easier to draw. The hardest thing I find is lacking a way of bracing my arm so I can have a steadier hand.
Posted by The HouseCat at 19:01