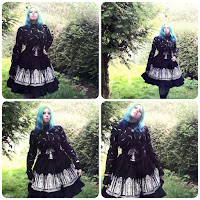 This is actually last Friday's "outfit of the day" - well, I actually wore three different outfits that day for different things; work, rest and a dinner date, but this was the one I photographed, and I think it would be a bit weird if I posted every single outfit I wear. This one was a bit a fancier, and I think it looked quite nice, so I am posting it up here. The skirt is familiar - it is my favourite skirt, from Restyle, but you will see that my hair has changed quite a bit. This outfit has obvious Gothic Lolita influence, but I wouldn't class it as actually Gothic Lolita because of the stripy tights, hair, and lack of accessories.


I no longer have a beautiful meadow right near my apartment to be photographed in, but I now live in my own house (well, Raven's and mine) and we have our own garden. It was left untended for quite a while 0 I think the property was vacant for some time over the growing season, and now it is a bit unkempt. There are some lovely rose bushes that I really must photograph, but for the most part it is scruffy and a bit overgrown in places with weeds. There are some nice fields near where I live, but I would need to be photographed by a second person, whereas I just plonked my laptop on top of the bins and used the timer function on webcam for these. There was not much time between having to poke the laptop and it taking a picture, so getting far enough away from the laptop for my whole body to get in shot while wearing platform boots was a bit tricky, especially as I am co-ordinationally challenged at the best of times! Scampering about the garden in ridiculous boots is not exactly something I am good at.

Outfit run-down: ☠ Blouse: HellBunny ☠ Cincher: Restyle ☠ Skirt: Restyle Stripy stockings: can't remember who made them, bought them in Osiris, Glasgow ☠ Boots: TUK ☠ Gloves: Accessorise ☠ Necklace: secondhand on eBay, not sure who made it.

It's not the best set of photographs to show my new hair-dye off (I will make a post soon just about my hair), but it is now violet underneath, then a layer of royal blue, then turquoise, then spring green on top, with gradiation. I did it myself, and it took a whole day of dyeing to get it done, and lots of bleach to get my dark, nearly-black regrowth to blonde. In the next few days, expect a proper blog post on my hair in all its rich colours. The filters I used on editing these photos washed out quite a lot of the colour. In real life, it is quite vibrant.


I wasn't wearing the most complicated make-up that day. It was just thick eyeliner with wings and points, basic foundation and some lip-gloss. I was going to work later and I did not want to spend a long time on elaborate makeup just to take it all off again!


As mentioned, these are taken on my webcam, which is not the best camera. If anything, it's somewhere about "potato quality" and both low resolution and poor at handling varied lighting. I edited them in ::PicMonkey::, which is what I edit all my selfies with. The only way these could be worse if I had taken them on my phone-cam. When I have my new house set up, I am going to mount a camera opposite a relatively blank wall so that I can have somewhere to take decent outfit of the day selfies. This blog will probably end up with more outfit posts on account that I will not have as much time to write extensively.


This outfit was something of a trial run for what I am going to wear to my induction day for University. I don't want to wear a completely fancy "vampire queen" sort of outfit, nor do I want to look too plain, because then I will feel like I am giving a false impression. I think the changes I will make are to wear a plain black blouse rather than the feather print one - something less visually cluttered - with a statement necklace. I will also swap out the striped stockings for plain black tights or over-the-knee socks, and swap the platform boots for something a bit easier to walk in. As much as I love my big platform boots, I do have quite severe dyspraxia, and wearing them out and about is impractical for me.  I have a tendency to try and pretend that wearing very high heeled footwear is a good idea and do it anyway, but it always ends badly (and often painfully). I will probably also wear more extravagant makeup, and braid my hair so that all the colours show through more.
Posted by The HouseCat at 06:00