Another Friday, another set of photographs. These are from the same day as the previous set, but of a different building. This is the Palace Hotel, and it is also on Ness Walk. It's got two big turrets on the front - a continuation of the bay windows and dormer windows into two 'towers'. It looks very grand, and the frontage is quite a mix of styles. It's a mixture of French chateaux details, Scottish Baronial and eclectic ornaments. The front has an arch over a balcony. 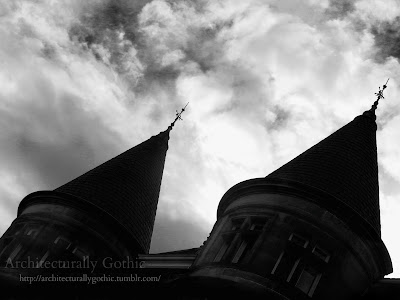 As with all my architectural photography now, these are on my Tumblr account ::Architecturally Gothic:: - I also post up pictures there that I don't post here (otherwise my blog would include far too many buildings!) and I talk more about the architectural historical aspects of what I photograph. I also reblog photographers with similar architectural interests to me (and often a similar black-and-white dramatic style, just a lot better than mine!).  If you like that sort of thing, I suggest you follow my Tumblr. I'm studying architectural technology at university, and so a lot of my photography is related to that, plus historical architecture is something of a passion of mine, so my Tumblr updates more than my main blog. 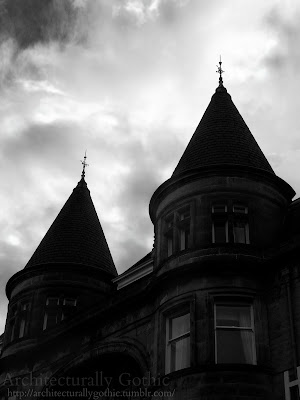 All of these photographs are for my college project, and are an attempt to capture the architectural character of the city centre and riverside area in pictures. I feel that Inverness is an underrated city, and this is partly because of a lot of mid 20thC developments that demolished lots of the old city and marred the overall character of the city - my project is a theoretical plan to address some of that. It's all academic, literally, and will never see fruition, but I like this project as an opportunity to show something of my vision in general, and my love for the city. Everyone in the class got the same brief and location, and I love this project. 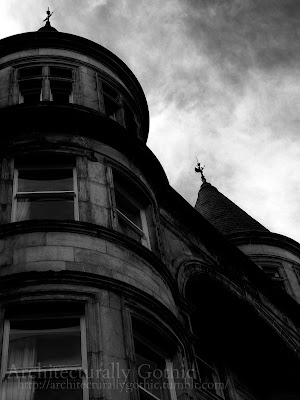 This last photograph was deliberately edited to be gloomy and dark. I quite like giving images that sense - I guess it reflects my general imagination, which is full of Gothic tales of the supernatural. The photographs I upload to ::Architecturally Gothic:: are not the only photographs of the city I took - there's quite a few full-colour images that a look a lot more bright and cheery, they just wouldn't be very suitable for either blog as both of which are about a certain Gothic atmosphere. My project booklet is a lot brighter than my blog; that wouldn't be suitable for the brief, or the nature of the project - Inverness has lots of stunning architecture that lends itself to spooky photographs, but it's not really a spooky city - it's one full of Victorian medieval-revivalism and red and yellow sandstone.