Anyway, this is a set of photographs from over a week ago. I actually made myself ill by going out and photographing this set - or rather significantly accelerated the progress of a cold straight into the worst parts. I've ended up missing college and not really doing much for over a week, and I'm worried I will get behind.

This is one of a whole heap of photographs I took of Inverness for a university project, and the only day I had to go in take photographs happened to be one of frequent torrential downpours, and I got soaked (despite my umbrella and coat) and the following day felt like death, and have spent most of the following week ill in bed with some sort of bad cold, perhaps the flu.

At least the Scottish Baronial gables are pretty. Note the stepped gables - these are called 'corbie-steps' or 'corble-steps' from the Scots word for crow; "corbie", or just 'crow-steps'. At some point I'm going to have to take a picture of some crows perched on them - there are enough crows about the place, but the seagulls keep chasing them off.


In a break from the rain the clouds were really rather snazzy. Again, the gables of the Columba Hotel (and a cute wee dormer window). Scottish Baronial architecture dominates Ness Walk, with the all narrow windows, many gables (and roof goes up to the wall and stops, instead of overhangs past it. This is very common with Scottish roofs. There's often a sort of hidden lead gutter called a raggle, behind the wall, otherwise water would get in.) These photos are for a college project. I’m doing an analysis of the current architectural context for a site, so I pretty much photographed the entire area around it…
Another photograph from Ness Walk. Many of Ness Walk’s gables all in a row, against the clearing clouds. It did rain again after that, but at least the weather was dry for a moment. The old parts of Inverness are beautiful and full of character - it’s a shame they demolished so much of it between the 1950′s and ‘70s and replaced a lot of it with ugly box buildings. A lot of Inverness’ older districts make me think of a scaled-down Edinburgh. There's even a prominent city-centre castle on a hill! 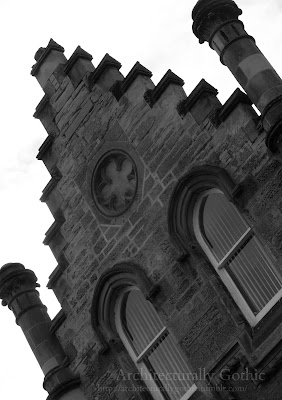 Here's another combination of Gothic Revival and Scottish Baronial. I think the two columns either side of the gable might be chimney-pots, either that or they are purely decorative - I'm not actually sure! The blind round 'window' in the centre is a cinquefoil Gothic tracery, and the tops of the windows have been pointed to Gothic arches, but still retain the overall 'vertical rectangle' feel of Scottish Baronial windows. The crow-steps are capped wit fancy stone, but are still very much crow-steps. It's a well executed hybridisation of what in this case are two medieval-revival styles. I think this particular building is either offices or a hotel. 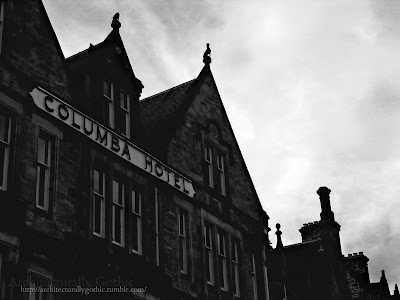 Hopefully these pictures have been enjoyable. I think my architectural photography is certainly improving, and I really must update my Tumblr with more photography.
Posted by The HouseCat at 10:52