Firstly a big thank-you to my first 50 followers! I feel honoured that you think my blog is interesting enough to follow.
Secondly, more photographs from Inverness city. I went back and took more, and this time I will post colour photographs as well as black and white ones. While black and white does suit the greyscale aesthetic of my blog better, some places just look better in colour. I'm still not much of a photographer, but I adore this sort of architecture, and I am trying to improve my photography skills too.

This is looking up towards the spire of the Free North Church which is by the river on the southern bank of the Ness, in Inverness city. The Church is actually reddish brown and is late Victorian, built in a Gothic Revival style. I have photographed it before, and there are more pictures of it in the previous photographic post.Dr. Alexander Ross and has a capacity of 1800. Dr. Ross was also the architect of Inverness Cathedral, which I have not photographed yet, but which I will do as soon as the renovation works are finished. While the church is very definitely Gothic Revival, there are hints of Neo-Classical architecture, but they form a cohesive whole. There are several beautiful churches along the banks of the Ness, including the Cathedral. At some point I would like to photograph ALL of the churches in the city as they are architecturally beautiful. Inverness also has several architecturally impressive civic buildings and hotels, and private buildings that may have once been civic buildings or hotels. I need to enquire further.

These are the columns at the front of the Free North Church - I think this church is currently one of my favourite buildings in the city, and is at least probably one of the buildings I have most photographed, even if not all of the photographs make the cut to be posted on my blog. I try to only post my best work to avoid picture spamming too much. It may not be amazing photography (I always feel terribly inferior when I look at my partner's work!) but I am a novice and I do try my best, and also try my best to learn and improve. I feel that I should have taken another step to the left to improve the composition, as the slight gaps between the columns possibly diminish it. To me the interest lies in how the red stone and wooden panels are contrasting textures but harmonising colours.

This is some pretty hefty buttressing!  There is an alleyway that runs between the graveyard for the Old High Church and the Free North Church. You can look upwards to the graveyard from it, as either the path was cut in, or the Old High Church on raised land. I think there are lights set into the alleyway paving (disks in the photo above) that light up the wall, but I've never been there at night to find out. I liked the sense of perspective and how the alleyway seems all crowded by the huge building. It is a very historical part of the city. The cobbles look gorgeous, but they're cobbles, so wear stiletto heels over them at your peril.

I spotted this in the above mentioned alleyway and felt compelled to try and photograph it in a flattering and interesting manner - I don't think I quite achieved that! Oh well, as I take more photographs I shall improve. I love Victorian street furniture, it is often very ornate, beautiful and has a good amount of attention to detail. Remember that Inverness was not a city when the Church was built, nor when this fancy lamp bracket fitted, and it is a small city now, even if it is the capitol of the Highlands, but even still the architecture is first rate and the city full of fabulous things and it is small (ok, this is quite a big and heavy cast iron bracket) details like this that really remind me of how nice things can be, and that beautiful things are not only for big, important cities like Edinburgh, London or Bristol (or Paris or Prague) but for every place.
There's a lovely arch in the wall leading to the path up into the graveyard of the Old High church. I tried to take a photo that avoided including too much random modernity, and had lots of weathered stone texture. One of the benefits of the pebble-dashed wall behind is that in being white it shows off the gate which has pretty wrought iron swirls.
This is an older photograph of the other side of the Old High Church - I took this photograph back in September or October, and it had been raining, so everything glistened and shone. It was late in the day, so everything had long shadows too. It's not an amazing photo from a technical perspective (there are lots of things wrong with it) but I do like the effect. I especially like how the damp edges of the path glistened, and how the marble (?) grave markers caught the light. 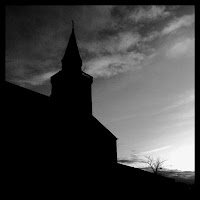 This is the Old High Church. I took a similar photograph before, which I have posted in my previous post of architectural and monumental photography, and posted to the right of this paragraph for comparative purposes. I think the previous shot was far more atmospheric due to having two sorts of sky - brooding and cloudy above the church, wispy and bright above the trees. The more recent photograph certainly has a more interesting sky, in terms of having varied clouds right across, but I am not sure if this is quite as atmospheric. I also took the second photograph from much closer to the building, and so the perspective is different and the composition is different. I don't think it is a terrible photograph, but I also don't think it is an improvement on the previous version. I was trying to go for something where there was more a quality of the building looming than in the previous photograph, where it was more a contrast between angular architecture and dramatic sky. Either way, if anyone has any constructive criticism, I would gladly hear it!
Last but not least, a chapel of rest on the far side of the river, part of a funeral home. This was taken the same day as the last batch of photographs from Inverness, but I wasn't sure about including coloured photographs into the post as I thought it might clash with the otherwise grey-scale aesthetic. Anyway, this building is built in a broadly Neo-Classical style, not sure entirely what the school of architecture is called. Compared to the churches in the area, especially the Catholic church on the same bank as this one, this building is a very imposing building. The Gothic churches are large stone-built buildings too, but something about the arches and detail makes them seem more elegant, and the Free North Church is positively airy by comparison. I think it is the severe lines of the chapel of rest. Either way, even were it a church and nothing funereal, it would still seem a cold building by comparison. This is not to say I dislike it, but it is a very different sort of building to the others here. 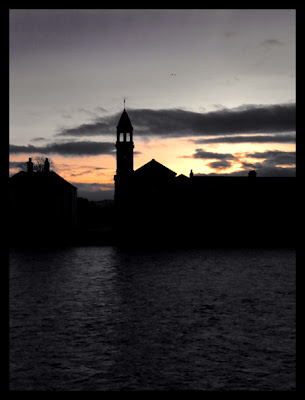 I hope this latest collection of architectural photographs are enjoyed. Even if you never come to Inverness and never take photographs of the architecture here, I hope you at least have a look around your own area for buildings that may seem familiar and everyday at first, but on a second look are far more impressive. I walk past these churches whenever I am in the city, and most people go past them without a second glance. I try to take lots of photographs of the buildings and other things in the city both as a way to learn to take better photographs, and as a way to keep my eyes open for beauty around me, and to avoid familiarity dulling my perception of what is around me.
Posted by The HouseCat at 05:30