Initially, this was supposed to be a 14 day corset challenge, but I pretty much failed that half-way through. Putting together a corset-centred outfit is time consuming, especially the getting dressed and getting laced up part, and even with Raven helping me I decided it just was not practical to wear every day. While my corsets are comfortable, they do restrict mobility to a degree (especially bending over) and when I have practical things to do, I'd rather not be wearing one. I was on October holiday, as I work at a school, and thus had two weeks where my outfit choices where not dictated by what was work appropriate, and I wanted to see if I could wear corset-based outfits for the whole duration. I know some people do wear corsetry every day, but I have discovered that it is not for me. Part of it is that my corsets are all really outerwear corsets, rather than underwear corsets, and for an outfit to incorporate a corset and seem fitting, to me at least, it needs to match the corset for fanciness, and I just do not feel like I can carry that level of fanciness on a day-to-day basis.

Firstly, I'd like to apologise for the photo quality; most of these were taken either on my smartphone or my webcam and neither of those have particularly amazing cameras, although the smartphone is considerably better than the webcam. My laptop's camera is actually relatively good in daylight, but really struggles with artificial light. All photos were edited at ::PicMonkey:: which is a free online photo editor, aimed at making selfies and similar funky and fun. 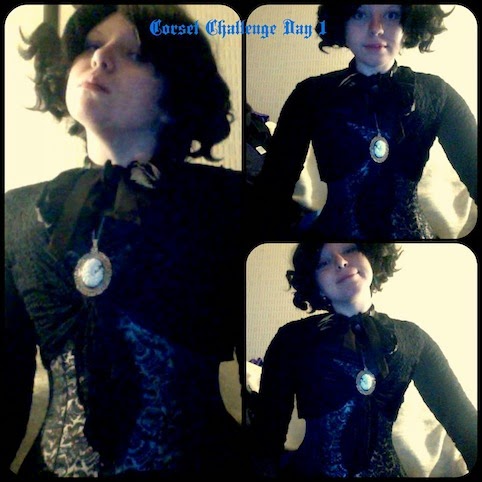 Day 1 Outfit Rundown:
My natural waist here 29 inches and my corseted waist here is 25 inches here, in a 24 inch corset. While I can lace them all the way, I don't wear corsets frequently enough to find lacing myself down to 24 inches very comfortable, so I tend to leave a bit of breathing space.

This is a very classically Romantic Goth outfit, with make-up and clothing choices that put me very much in the greyscale. I am not naturally that desaturated and pale; I used white foundation (and remembered to apply it to most exposed skin) to take the rosiness out of my skin tone (I'm already very pale) and used grey and silver as shading on my face, in order to aim for something akin to being a black and white photograph of a person but alive in the polychromatic world. Having naturally grey eyes helped! The entire outfit was built around matching the aesthetic of the pewter raven necklace with its black 'stones' (which I think are either plastic or glass) which was both wonderfully detailed and very Gothic, and made me think of old black and white horror movies.

One thing I would improve is choosing a top with a different line of frills the nest time; I feel like the line of the corset and the line of ruffles should match, as with the ruffles across the top of my bust, this looks a little strange. 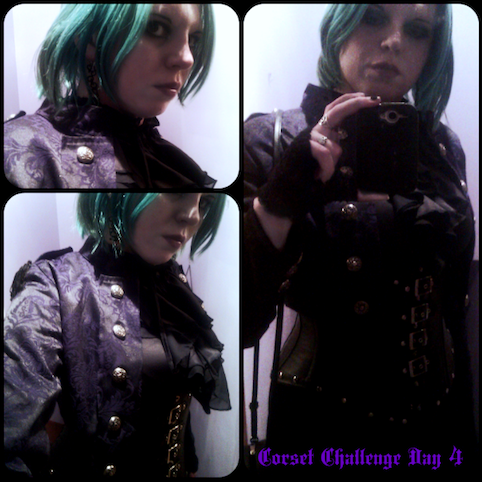 I tried for a more casual outfit, but as corsets seem fairly fancy to me, the rest of the outfit ended up fancy anyway. It's hard to tell in the photographs, but I'm wearing a skirt with it - if I had a longer mirror I'd show that it's floor-length. I love pairing purple up with the blueish green of my hair, so I picked this rather fabulously patterned cropped jacket from Dark Star. Far Fetched were very accommodating, and as I am a regular customer (they sell incense... ) I was able to pay for it in instalments, and therefore buy a much fancier jacket than I could normally afford.  One of the reasons to support independent retailers is that it is far more likely that they will allow payment plans for items that aren't expensive electronics!

This outfit was all about the lovely sleeves off this cape/shrug/over-shirt/cardigan thing... It's loose, floaty, sheer and light synthetic chiffon with vast bell sleeves that end in ruffles, and it swishes delightfully. I bought it for £1.99 in a charity shop and decided that the neckline was too plain, so hand-stitched that crochet-lace (venise lace?) collar onto it, and the collar was cheap on eBay. Originally the collar was for another project entirely, and I bought somewhere around a year ago, but it was too big for the blouse I wanted to sew it to, so it just lurked in my sewing supplies until I figured it would go well with this item. I also changed the black buttons on the top for silver-tone metallic ones, and instead of doing the bottom buttons up at the front, I like doing them up behind me when I am wearing a corset, to emphasise the curves of the corset.

I really like how this outfit turned out (probably a bit too proud of it, actually!) and it is certainly an outfit I'd wear again, especially that top! I just love the big, floaty sleeves. I'm a bit annoyed with the photographs, though; on the whole they're a bit hazy, and a mixture of washed out and strangely dark. I think I over-lightened my face in the third picture down, in order to try and make it visible - at least I look ghostly, which seems apt in the run-up to Halloween!


Day 6 Outfit Rundown
Same corset as before, laces to 26 inch waist. ⚰ Spikes: (an assortment of places, mostly market stalls in Camden, Reading and Bristol; I've had them so long that I don't remember where I got them all)
⚰ Upper set of choker spikes are from a wholesaler on eBay, Phoenix1900
⚰ Blouse: Zanzea (Christmas present from Raven)
⚰ Corset: Leatherotics
⚰ Belt with overskirt: Gothic, Lolita & Punk
⚰ Mesh gloves: (secondhand on eBay, unbranded)
⚰ Skinny trousers: H&M

This outfit is far more modern in its Goth. I picked buckled accessories with spikes and studs and obvious eyelets to co-ordinate with the studs and buckles on the corset. The last two outfits with this corset were based more on anachronistic ruffles - this one is far slicker. I am wearing skinny black trousers with it, and picked a fitted shirt and stretch mesh gloves. I guess this sort of fashion style is rooted more in Underworld and Resident Evil than the usual period horror inspirations! I felt rather badass wearing this outfit (although I don't think my martial arts skills and weaponry are quite up to par with those of my pop-geek culture heroines!). I finished it with my eternally comfortable army boots.

My make-up isn't actually as pale as it appears in this photograph; that's a byproduct of my tinkering with the contrasts and such to make the detail apparent in what was quite a dingy and poorly lit pair of photographs. As you can see, I have been given a new smartphone, but it is 'only' a cheap one, and the camera is not a significant improvement upon the last smartphone camera, so I am afraid that the photograph quality is still lacking. I have noticed that the flash on my new smartphone isn't very powerful. At least it's still better than the webcam!

Day 7 Outfit Rundown
This is a new corset I ordered cheaply on eBay. It is supposed to be a 26 inch waist and suitable for tight-lacing, but with its use of spiral steel bones throughout, rather than rigid steel bones, I am reluctant to lace it all the way in case it warps.
⚰ Dress: Tic Toc
⚰ Shrug: Tesco (secondhand in a charity shop!)
⚰ Corset: eBay
⚰ Belt: (unknown, secondand, charity shop)
⚰ Necklace: Phoenix1900 on ebay.

I am really disappointed with how the photographs came out for this, but I really don't think either my smartphone or my webcam deal with electric lighting indoors very well. My older smartphone coped much better, as is evident in fourth set of selfies. The dress is stretch lace, and very slinky, and the shrug is woven lace and a nice pattern. I tried to highlight the belt, but the swirling plant designs on the metal are lost, as is the intricate lace of the choker.
Posted by The HouseCat at 09:00