After 7 of my fanciest outfits, I thought I would share some of what I look like on just an ordinary weekend.

As readers may know, I love fancy things - whether that is clothes, architecture, artwork or really anything - but that does not mean I think everything should be as fancy as possible all the time. Firstly, I feel that if I wore my fanciest clothes everyday, that they would start to loose their specialness to me; with time becoming ordinary, and secondly, it just would not be practical, and my nice things would get ruined as I snag lace, get ruffles mucky and long coats and hems get trapped in doors. There are already so many jackets I have waiting to have buttons sewn back on because I've managed to catch them on something!

That said, I do not want to abandon my personal aesthetic completely, and so a lot of my casual outfits are still a bit more fancy than more mainstream casual clothes, but they include cuffs that are less likely to get snagged, often trousers rather than skirts. Accessories, my unnatural hair colours (whether dyed or wigs) and choices in fabric all help to keep things within the aesthetic I prefer.


This is a summer outfit I wore to a friend's 50th birthday party. It was a summer's day, a casual garden party, and they are not Goth, so I didn't go for one of my more elaborate outfits, and instead went for just a weekend's summer outfit - my casual is still fancy enough for a mainstream garden party!

I picked floaty top that sits somewhere between hippie and Goth in its semi-sheer fabric and Medieval fantasy inspiration, a plain maxi skirt, and a belt to add interest and pull the top in at the waist, as it is quite loose. It was Gothic, but without overt morbid symbols - no skulls, no zombies, no coffins - just plain black crystal stud earrings, a silver bracelet of studs-as-beads, and a black metal laser-cut effect foliate necklace from eBay. It is hard to make out on the photographs, but I painted my nails an iridescent lavender-grey, with black tips. I wore make-up that was pretty natural-looking for my face and lips, but dramatic around the eyes, and while it's hard to make out, I had green eyeshadow to match my hair, and little leafy scrolls in the corners to match my necklace. The sleeves end short of my wrists, so even with their long drapes, they rarely get caught in anything. The lace detail around the square neckline (I love square necklines!) and the design of the sleeves make this a top that is fancy enough for my tastes, without being oodles of brocade and velvet and suchlike.

The above outfit was just what I would wear on any Saturday. I have brocade trousers (I think the brocade is actually visible on this photo, for a change!) a lace-up crop top, and a cardigan with lace panels. What you can't see is that I'm wearing it with New Rock boots, because my mirror isn't long enough to show boots. This was quite a bit later in summer (you can see my hair has grown out a bit and faded) and the weather was a bit cooler, but it was still warm enough to warrant a thin cardigan and a light blouse. The blouse, hard as it is to see, is of a synthetic satin with deliberate crumples, and laces up the front with ribbons - a design that is quite Gothic even if the top was originally from a mainstream shop, and bought in a charity shop years ago. The cardigan has ties at the neck, which are not visible in any of these photographs, and the lace panels give a square neckline effect without actually having that much neck and upper chest uncovered if it gets cold enough for me to want to do the whole thing up (it didn't, so it is just tied at the neck here). I saw no need to bother with make-up, and just wore a studded cuff on one wrist, and a skull bead on some black ribbon on the other, along with my usual rings.

The brocade of the trousers, lace on the cardigan, and materials of the blouse, along with the New Rock Boots, all combine to make it an outfit a bit fancier and the studded cuff, boots and green hair, as well as the all-black outfit, keep the outfit firmly in the Goth aesthetic. The outfit is pretty practical, with comfortable boots, trousers, and a top that has little to catch on things and is warm once buttoned up.

This outfit has taken a bit of inspiration from Japanese Goth and Visual Kei fashion and is a step up in fanciness. Again, it is based around trousers for practicality's sake. I'm wearing slim-fit black jeans from H&M with rather ornate embroidery down the sides. (I really need to get a good photo of them!), my favourite blouse that I have ever owned (and which thus turns up in a lot of my outfit photos) and is from Zanzea, and more accessories than in the other outfits. I remember that I wore boots, but I can't actually remember which pair! I'd guess probably my army boots, as I love them and wear them as much as I can due to them being very, very comfortable!

I am wearing lace fingerless gloves, which something I almost constantly do if it is not too hot out! I actually feel weird going out without some kind of gloves on. Around my hips is a belt with mesh and  lace over-skirt style panels from Gothic Lolita and Punk, and instead of my real hair, which was actually at a pretty similar length, I went with the black and red wig as it is much easier to style into that Visual Kei style with individual locks of hair coming to points, and volume at the back. The crescent moon earrings were a gift from Raven and bought for me in Wales.

Again, I am wearing very minimal make-up, just some concealer, tinted lip-balm (to actually make my lips less pink) and a bit of shimmery eye-shadow in a natural colour. The minimal make-up was more to enhance my natural features than to do anything artistic like I would normally do - quite a different ethos than I normally have when it comes to make-up!

Altogether, this outfit is more androgynous than my usual outfits, which are often what would be traditionally regarded as feminine. Personally, I think clothes are for whomever they fit, and dislike the gendering of clothes. 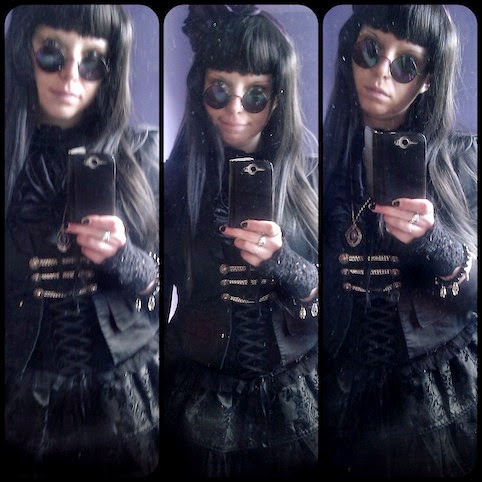 Finally, a very fancy outfit, and quite an old set of photos that people who read this blog will have seen before. This is about how fancy my "just going out" outfits get; this one was for lunch with friends.

When I write this blog, I tend to showcase my fanciest outfits because they often feel the nicest, the most special, but I sometimes feel like I'm unwittingly contributing to a sense that Goths need to be at their fanciest at all times, or perhaps that I am fancy all the time - neither of which are true.
Posted by The HouseCat at 07:30